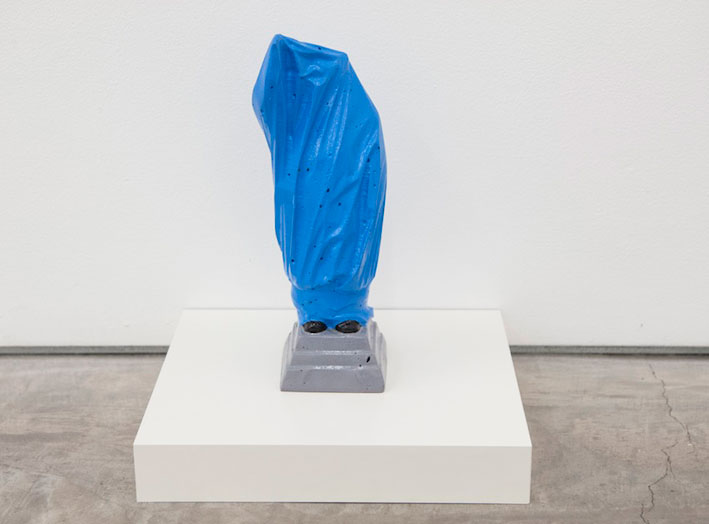 Cover Up #19 (M3) is part of an ongoing series that was begun in 2012. Each is generated by physically covering specific objects, including paintings, monuments and a cluster of figurines of significant religious and political leaders.

The covered object is 3D-scanned to produce a digital image, then computer-modelled, and sent to a CNC machine for foam-cutting. A final, finer cut is then made using resin manipulated to introduce holes onto the surface.

The series of figurine-sized Cover Ups includes a Buddha, a bust of Tito, a plastic figure of George W. Bush and this one, which is a covering of Chairman Mao. In some works I leave a section of the object exposed, a tiny suggestion that hints at its identity. In Cover Up #19 (M3) it is the very particular black shiny boots of the Chairman on his plinth that gives the game away.

Objects in this series are small, mass-produced icons which are brought back into the world as new multiples, using a contemporary manufacturing process that is common to the mass-production of objects today.

These are not sculptures so much as they are things that exist in the space between an image and an object.

Callum Morton, born in Canada, is a Melbourne based artist. His works have been exhibited nationally and internationally since 1990. Morton's career has combined academic positions and engagement with studio practice. He has held academic positions at the Art Centre College of Design in California, the University of Melbourne, RMIT, and is currently the Head of Fine Art at MADA, Monash University, Melbourne.

His artwork has been displayed in numerous galleries worldwide, including the Santa Monica Museum of Art, the Hamburger Bahnhof and the Ian Potter Centre. His work was included in the Indian Triennial, New Delhi, India, 2004; the 2nd Istanbul Pedestrians Exhibition in Istanbul, 2005; the Busan Biennale, South Korea, 2006; and the Biennale of Sydney, 2014. Morton represented Australia at the Venice Biennale in 2007.