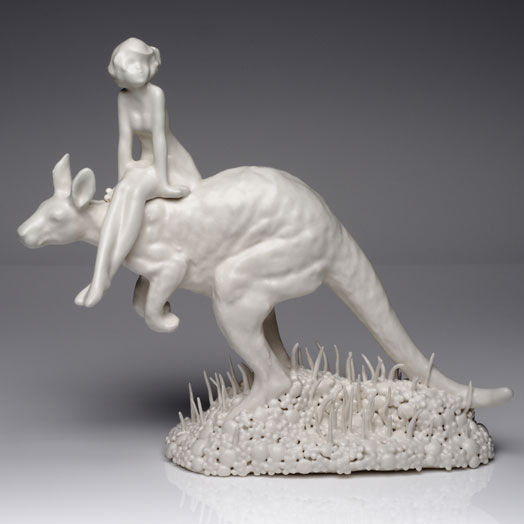 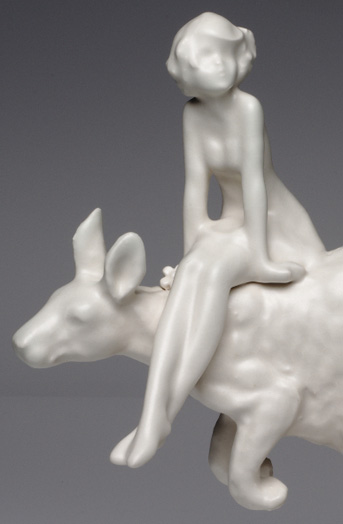 In Flight is based on the flight of refugees and asylum seekers to Australia. After working with refugees and asylum seekers for many years I was exposed to personal stories of trauma, torture and tragedy. Their painful accounts had a profound effect on me and in empathy I found myself vicariously suffering many of their symptoms. This work is about the moment someone flees.

To capture the mythology of a safe place I decided to incorporate the Australiana style of the 50's and 60's. The Roo is a symbol only associated with Australia and Australia often represents a place of safety. To achieve this, the techniques I have used include hand building, carving, coil making, slip casting and press moulding in porcelain from handmade plaster casts. For the surface of the sculpture I have used a matt white glaze.

I am a ceramic artist, living and working in Sydney. I completed my Bachelor of Education in Art at the City Art Institute (COFA) in 1989. In 1994 I completed an apprenticeship in ceramics in Santorini, Greece. I worked as a visual arts teacher in metropolitan and south western Sydney until 2010. In 2013 I completed a Diploma in Ceramics at the Southern Sydney Institute, Gymea, receiving the award for excellence. I work mostly in porcelain and stoneware making small sculptures.