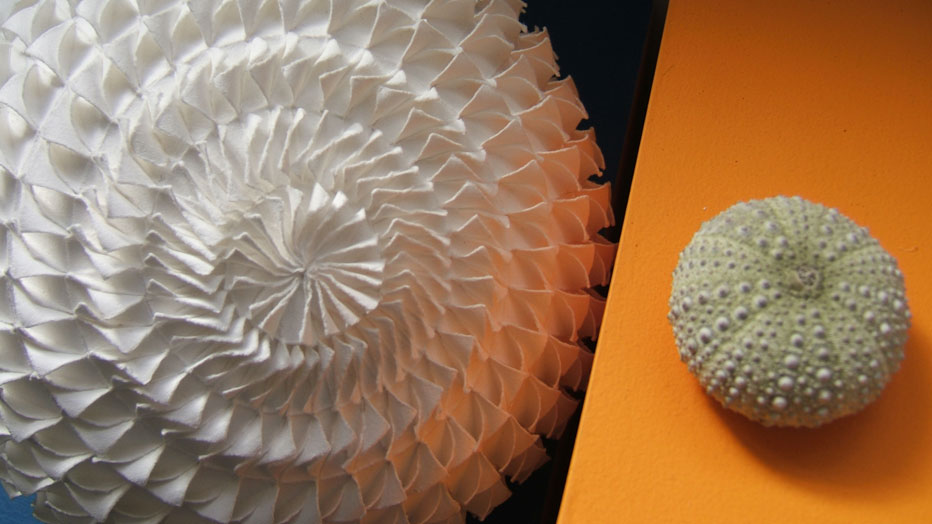 I see no great divide between science and the arts. I incorporated art into my previous career as a science educator and science informs my art practice. My work is driven by observation and obsessed with light and colour. It is about slowing the eye and seeing beauty in simple forms.

I work in low relief using identical units, arranged in predetermined sequence, to catch and colour light. Ambient light, varying through the day and night, as well as paper, is my raw material. When working in three dimensions these simple sequences of number and direction generate objects reminiscent of organic forms.

Like mutations in DNA, small changes in sequence lead to differences in structure. I aim to continue experimenting and producing works that engage with number, development and diversity to produce objects of beauty that can engage the viewing public.

Liz Shreeve is a Sydney based artist with a background in science. She completed a BSc (Hons) at UNSW and a BFA (Hons) at NAS.

Recognised as an artist working in paper, Shreeve has been a finalist in major works on paper prizes including the Hazelhurst Prize (2011, 2013), Hutchins Prize (2011, 2013) and the Mornington Peninsula National Prize (2012, 2014). In 2012 she was invited to exhibit in Paper Now at Willoughby. She has also featured in Radio National’s The Story of Paper (2013) and been invited to contribute to Paper Play 2014, a book from Sandu Publishing.

Shreeve has been awarded grants from NAVA, Arts NSW, Marrickville Council and Bathurst Regional Council. She has exhibited widely in Australia and overseas including Miami, Grenoble, Paris and Vienna. Her work is held by Kempsey Shire Council and St Vincent's Hospital and features in corporate and private collections in Australia, Indonesia, USA and France.