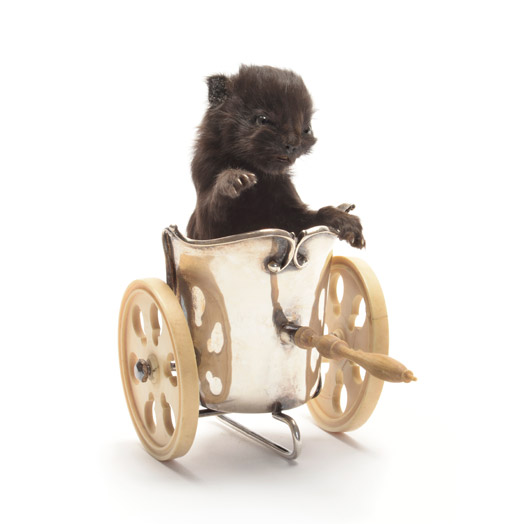 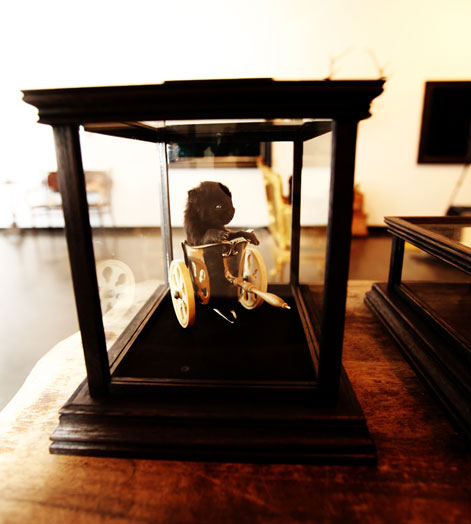 In the art of taxidermy, gesture is paramount; hence for jeweller, taxidermist and vegan, Julia deVille, the most considered aspect of creation is composing her subjects to find a balance between pathos, humour and dignified realism.

Arriving in Australia from New Zealand on the cusp of adulthood, deVille trained as a jeweller and learned further crafting skills studying shoe design, before her long hunt for a taxidermy mentorship was successful. Driven by a strong commitment to animal rights, her sculptural assemblages belie the heroic, trophy-hunting culture associated with mounting dead animals. In a form of gentle protest, she combines precious gems and metals with antique 'ready-mades' to challenge our disregard for and consumption of both wild and domesticated fauna.

Drawing on Renaissance, Baroque and Victorian art and ideas, Julia deVille creates contemporary 'memento mori' that raises our curiosity through the use of paradoxical processes and materials. While all of the creatures have died a natural death, they live on as beautiful and compelling allegories, begging a reflection on our symbiotic but decidedly unequal relationship with the animal world and our cavalier disregard for mortality in general.

Commissioned by Hobart's MONA to create a permanent installation in 2011, Julia also won the City of Hobart Art Prize in 2012 and the Wallace Art Prize in 2013. In 2006, her work was included in the MCA's Primavera survey exhibition. DeVille’s work was acquired by the National Gallery of Victoria in 2012. In 2013 she was featured in the National Gallery of Victoria's Melbourne Now and in 2014, the Adelaide Biennial at the Art Gallery of South Australia which resulted in the acquisition of the work Victorian Cat Mummy. Julia exhibits regularly in Australia and overseas.