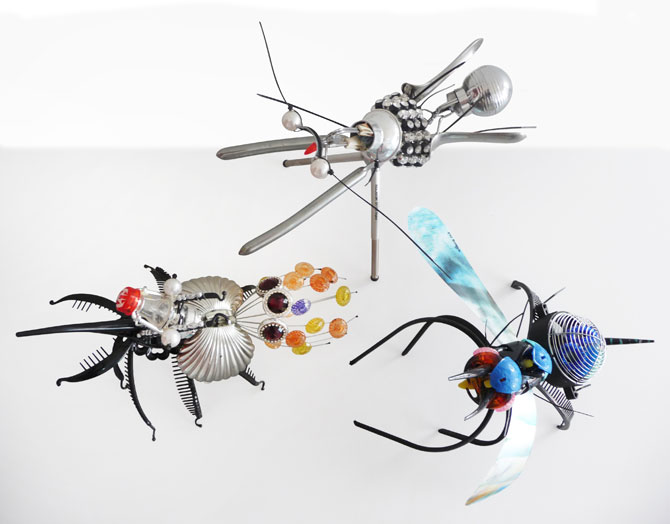 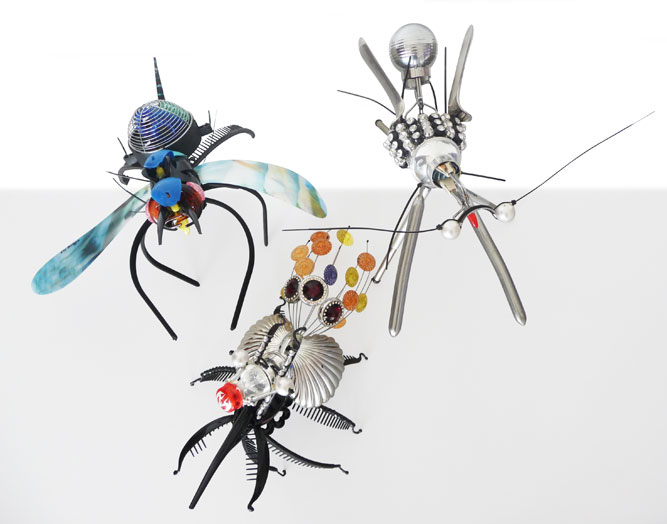 MYRIAD is one work made up of three small sculptures, and reflects the untold thousands of objects/utensils that daily swarm our lives.

Eli Braga has developed sculptures with personal objects, found or purchased at discount stores. Everyday objects are transformed and assembled into art. Eli's sculptural work is essentially contemporary, crafted with the unexpected and unusual. These sculptured characters attract attention for their recognisable parts, and yet are surprising as a single artistic object. The viewer delights in visually dissecting these robot-like creatures made of the ordinary utensils used in daily life.

According to Eli, intuition motivates him to collect the diverse objects which lead to an inspiration for the work. He is seduced by the individual parts sensing possible junctions which eventually form the whole.

Eli Braga was born in Brasília, Brazil and migrated to Australia in 1991. In 2011, he returned to Brazil. Eli received his Masters in Fine Arts, majoring in drawing from College of Fine Arts, University of New South Wales in Sydney. He currently works as a teacher, lecturing drawing, painting and sculpture at the University of Arts Dulcina de Moraes in Brasília.

As a practicing artist, Eli has done several art exhibitions, including at the National Museum in Brasília, Confluencias, Freemasonry Museum Sydney and Mostra Dulcina de Artes Visuais, Brasília. He spent 10 years at the Walt Disney Studios in Sydney and participated in numerous productions of animated films for television, video, DVD and cinema.