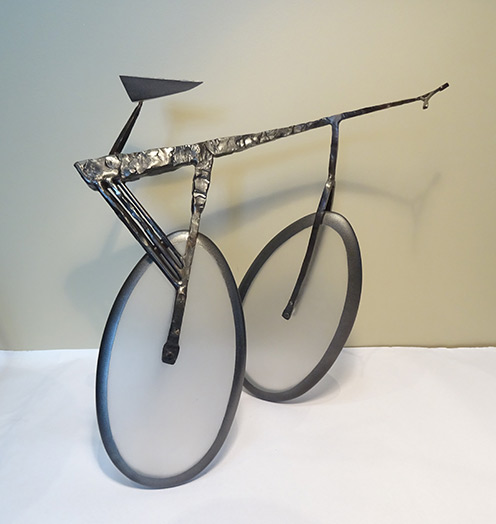 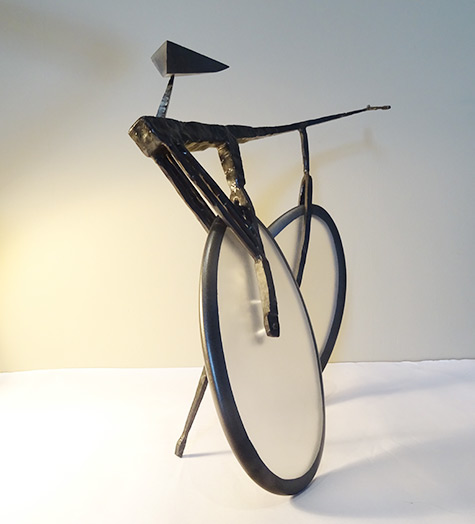 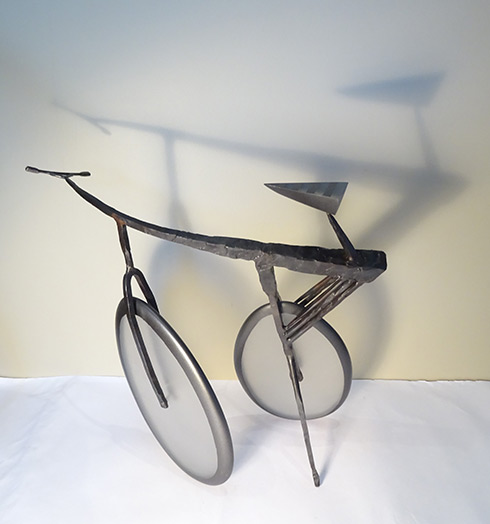 My sculpture, Alberto's bike, reconfigures the geometry of Le Chariot into a stylised bike form. Alberto's bike combines traditional metal forging with modern plastic. The hammered bike frame references Giacometti's textured bronzes, while the striking ovoid shaped wheels and triangular seat add bold contemporary design. I like to imagine Alberto's bike as a two dimensional vehicle designed for three dimensional travel through space. You could argue that a bicycle really only has two dimensions, a height and length, a bike's width in comparison is bordering on irrelevant. Lastly, Alberto's bike's whimsically gestured aesthetic captures the spirit of its absent rider.

Peter Zappa is a professional sculptor based in Perth, Western Australia. He holds a degree in Fine Art from Curtin University and has exhibited in Western Australia, Victoria and New South Wales. This year he held a Red Gate Residency in Beijing having earlier taken up an artist residency in the Parsons Institute in Paris, France.

His commissions include artworks for public spaces, art galleries and private collections. Peter has worked with state government agencies and local governments in Western Australia including the cities of Vincent, Cockburn and Canning.

Peter's artworks are constructed from robust materials such as timber, steel and stone. His works, amongst other things, explore the concepts of form, drawing and space. Aside from having works included in numerous group exhibitions, two solo shows entitled Space craft and Space Matters have been staged at Perth Galleries while his awards include the 2012 Landscape Industry Association WA Awards of Excellence for Best Built Feature, the inaugural City of Stirling Sculpture Prize in 2006 and First Prize Sculpture at the Darlington Arts Festival.