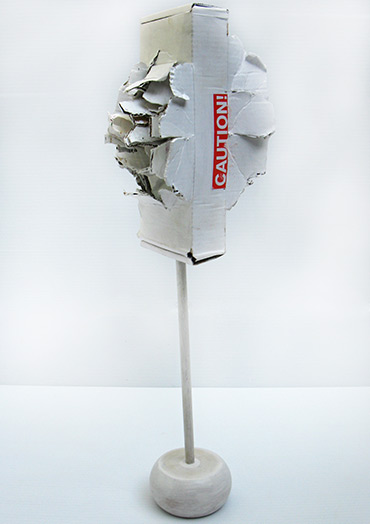 Is this work about an inmate interest in entropic forces and the struggle to maintain order, or do I just like things that go bang?

Sydney-based artist Shane Forrest has been working with 'the street' since the early 1980s and consistently exhibiting since that time. The ephemeral, the discarded, the unremarkable and the evidence of entropy in our daily lives are reoccurring themes in Forrest's work. He makes 2D and 3D works informed by his local environment, both the inhabitants, as well as the physical environment. He is attracted to representing, in small sculptural maquettes, the sometimes unusual and surprising shapes made by people with their accessories, as they move through the environment.

An interest in the Sydney obsession with real estate is a theme for both painting and small sculptural explosions. These 'explosions' are the latest direction for Forrest. They are a collision of plenty and entropy.

Forrest produces his work with mainly reclaimed materials - old palettes, worn out brushes, failed or discarded canvases thrown out into the street. His practices are historically connected to the Nouveaux Realists (1960 -1963) and Raymond Hains' particular "affichist" conceptual concern for engaging with the unspectacular.

He completed a Masters of Art at the College of Fine Art, UNSW in 1995 and teaches Japanese and Visual Arts at Dulwich Hill High School of Visual Arts and Design.

Forrest was most recently represented by A-Space on Cleveland until its closure in 2012. He is represented in private and institutional collections and has held solo shows in Australia and Japan.

Shane Forrest, in conversation with Professor Ian Howard, discusses his work Caution and answers questions from the audience. Recorded on 15 October 2016 at the exhibition.