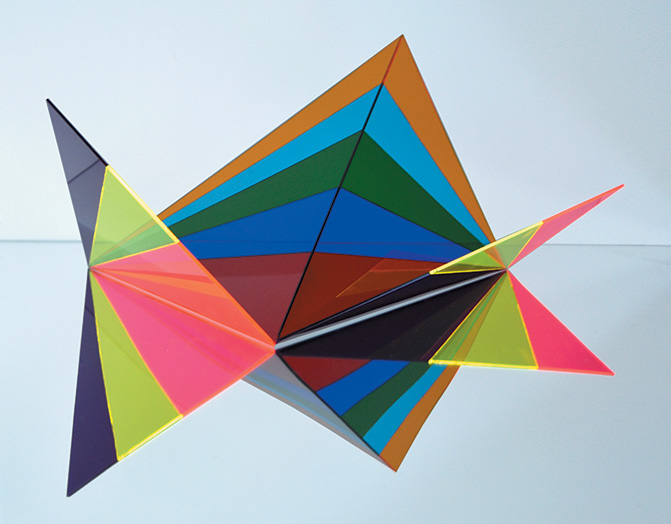 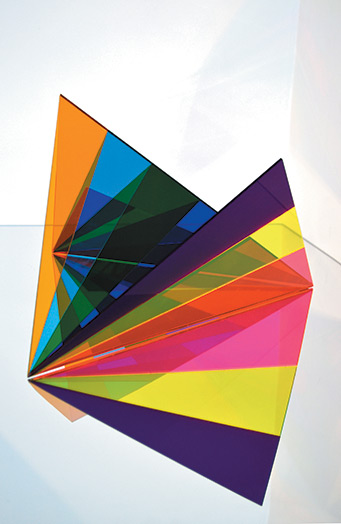 Borrowing processes from architectural thought, my practice utilises acts of painting to transform, construct and alter environments, objects and surfaces. Simultaneously, negotiating between the formal and the kitsch, the concrete and the ephemeral, my aim is to challenge boundaries and make connections between the high and the low, history and currency, the intellectual and the ornamental.

In my work, colour is used as a 'common' agent to navigate between these opposing forces, where the central concern exists around space, and my preoccupation with its utilisation as a 'medium'. In construction #7 (shifting test patterns), the autonomous art object explores a relationship with space through the utilisation of 'light' as a medium. Shifting silhouettes are revealed through this pre-determined spatial structure where the painted coloured light becomes the ephemeral art object. The parameters of spatiality are once again examined to question the distance between place and painting.

Coulter has been the recipient and finalist in a range of awards and prizes, including the 2016 Linden Prize, the Fiona Myer Award for Excellence (2015), an Australian Artists Grant (2015) and the Jim Marks Postgraduate Scholarship (2014). Coulter was also a finalist in the Windsor Prize, (2014) and the Sydney Art Month emerging artist program (2013).

Her work is held in collections at Artesian Capital Management, Citigroup Wealth Advisors and Tower Books, as well as numerous private collections in Australia, the United Kingdom and Germany. Emma is represented by Anna Pappas Gallery in Australia.

Emma Coulter, in conversation with Professor Ian Howard, discusses her work construction #7 (shifting test patterns) and answers questions from the audience. Recorded on 15 October 2016 at the exhibition.