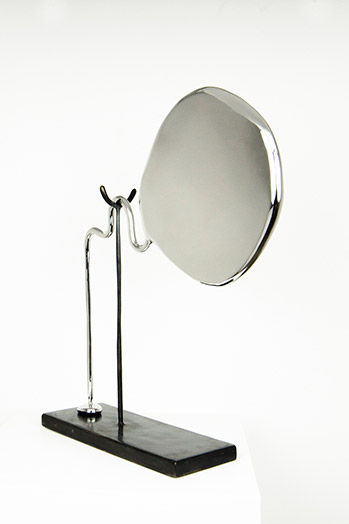 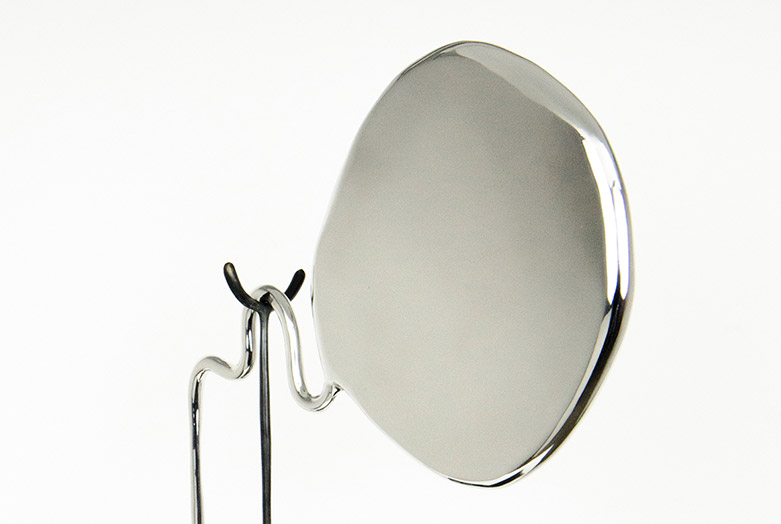 Deflating Form is a sculpture about possibilities, real or imagined, in a state of flux. Ideas, relationships, grand dreams sagging and deflating, even the support of a crook cannot stop the slow decline. The sculpture is made from highly polished stainless steel so we can see our reflection when we contemplate the piece.

Working as a sculptor, painter and jewellery designer on the banks of the Meander River in Tasmania, when it comes to sculpture Hugh McLachlan's material of choice is metal. Working on both small and large scale forms in polished stainless steel, their surfaces are highly reflective and allow Hugh to explore the nature of reflection and illusion; how light plays with our perception of the world and changing states from solid to liquid.

Represented in Sydney by Traffic Jam Galleries in Neutral Bay, Hugh has been selected for such prestigious exhibitions as Sculpture by the Sea both at Bondi and Cottesloe WA in 2011, 2013 and 2014, and Victoria's Montalto Sculpture Prize competition in 2015.

He obtained an Associate Diploma of Art & Gold & Silversmithing from RMIT Melbourne in 1976 and four years later established the McLachlan Studio. His works have been included in a number public collections including the National Gallery of Australia, Canberra, the Brisbane Art Gallery and Tasmania's Queen Victoria Museum & Art Gallery. A number of solo and group exhibitions have included his work, most recently in 2015: Sculpture & Paintings at Traffic Jam Galleries and the solo show On Reflection at Gallery Pejean, Tasmania.

Hugh McLachlan, in conversation with Professor Ian Howard, discusses his work Deflating Form and answers questions from the audience. Recorded on 15 October 2016 at the exhibition.