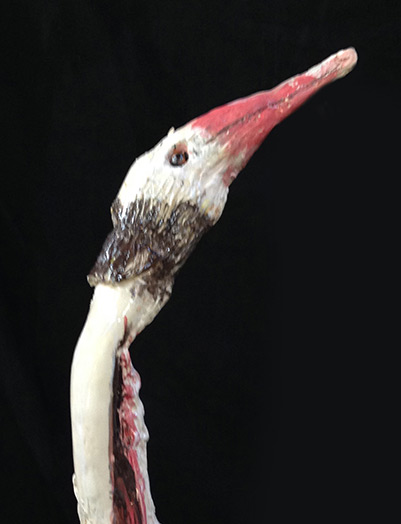 This work is from a series of ceramic sculptures based on my Endangered Species theme. Endangered (Grebes) is a free standing work of Tasmanian water birds. The Grebe species is under threat from loss of habitat and environmental damage.

Rodney Pople is an interdisciplinary artist working in drawing, painting, sculpture and photography. He received a Diploma of Fine Arts (Photography) from the Tasmanian School of Art before undertaking postgraduate studies in sculpture at the Slade School of Art in London and the New York Studio School.

In 2014 his work was the subject of a major solo exhibition at the Australian Centre for Photography (ACP) in Sydney. Pople is best known as a painter of landscapes and interiors, and works that combine the two genres. His work has been included in many curated and award exhibitions. He won the Glover Art Prize in Tasmania in 2012 with a landscape of Port Arthur, and the NSW Parliament Plein Air Painting Prize in 2009. In 2008 he won both the Sulman Prize at the Art Gallery of NSW and Kings School Art Prize, and the Redlands Westpac Art Prize in 2006.

Pople has been the recipient of two large Australia Council grants for research and new work since 2005, and has been awarded residencies in Paris and Beijing. In 2010 he was an artist-in-residence at Taronga Park Zoo. He is a part-time lecturer in painting and drawing at the National Art School, Sydney. In 2013 Pople made a trip to Africa as research towards his latest series of paintings featuring African animals in interiorised landscapes. The paintings juxtapose Pople's own photographs – of landscape, parliament interiors and endangered animals – and traditional painting methods, to suggest the artificial and contrived nature of human authority. Filmic in conception and technique, these works combine fact and fiction, photography and painting.