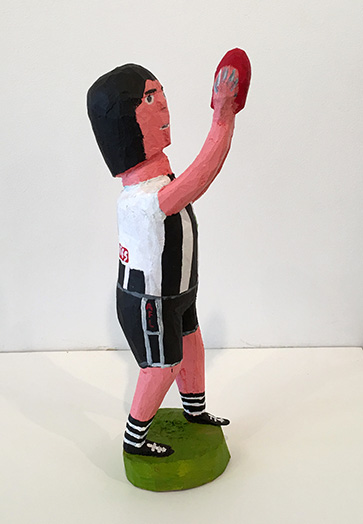 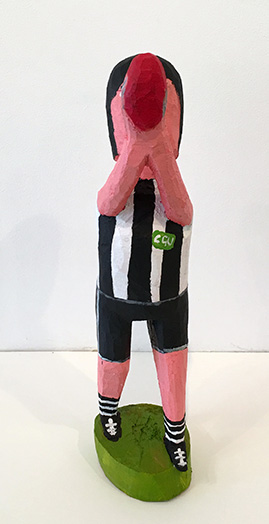 I started carving in 2005, helping my wife, Josie Kunoth Petyarre. We carved 16 footy players which we showed at the AFL Hall of Fame in our exhibition, Centre Bounce. Josie and I went to Melbourne to see the show. While in Melbourne, we went to the MCG to watch the Demons play the Saints.

I have lived at Utopia my whole life, caring for the land and keeping a connection with my family's ancestors through the Dreaming of my country. Josie and I go out looking for the right trees, which we carve to make our sculptures. We use an axe, tomahawk and a large rasp. Here I have carved one of my favourite players— Scott Pendlebury and I love watching him play.

Dinni Kunoth Kemarre was born in 1954 at Utopia Homestead in the Northern Territory, where he continues to live and work. Since 2005, Dinni has spearheaded a revival in the Utopian sculptural tradition that first emerged in the late 1980s under the stewardship of art co-ordinator Rodney Gooch.

Since 2007, Dinni has risen to prominence as a consummate observer and compulsive chronicler. In his art, the minutiae of everyday life becomes a worthy subject for artistic exaltation, demonstrating a vision unencumbered by restrictive binary notions of 'traditional' and 'contemporary'. Art has always been a part of the Indigenous cultural backdrop, connecting Indigenous people to the world around them and the immutable Dreaming. The art of Dinni Kunoth Kemarre shows us just how adaptive this cosmology could be.

His artworks are included in a number of public collections including Artbank, the Berndt Museum of Anthropology (University of Western Australia), the Gold Coast City Art Collection, City of Perth Collection and the Kerry Stokes Collection in Perth. In 2010 Dinni was a winner of the South Australian Museum's Waterhouse Natural History Art Prize. He has also been a finalist numerous times in art prizes around the country including the 2007 Woollahra Small Sculpture Prize. He is represented by Mossenson Galleries.