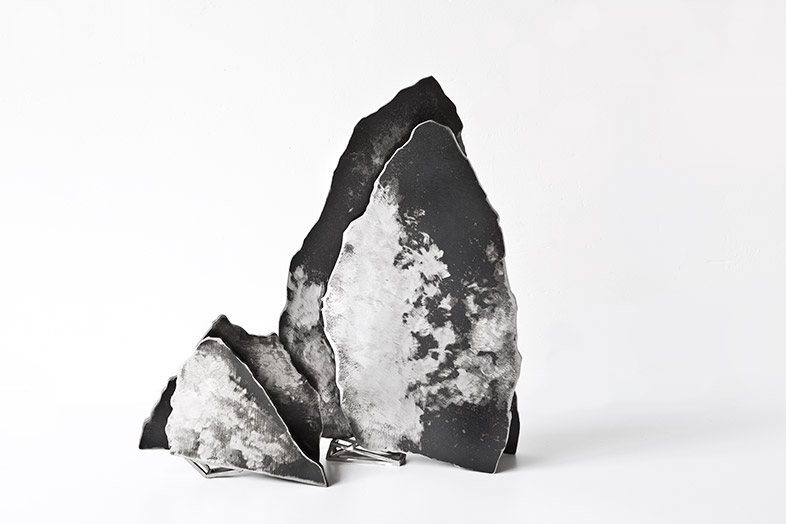 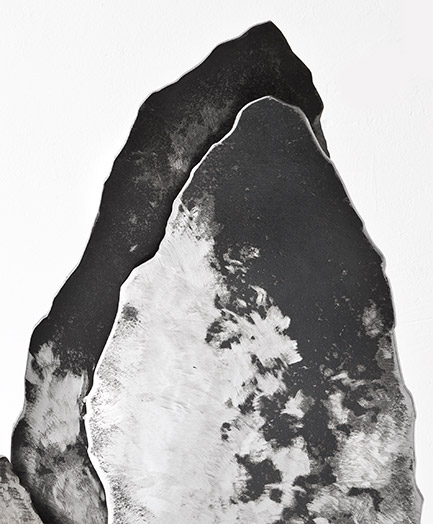 This sculpture Immortal Mountain is part of my ongoing sculpture practice focused on landscape. It is inspired by Shan shui (Chinese: 山水 literally "Mountain-water"), a style of traditional Chinese painting that involves or depicts scenery or natural landscapes. These landscape paintings are usually centered on mountains shrouded in cloud. Mountains have long been seen as sacred places in China, viewed as the homes of immortals and thus, close to the heavens. This sculpture attempts to embody the light and airy feeling of these paintings while shifting the focus to the modernity of the materials and processes used to make it, i.e. laser cut steel with engineered wedges that 'uproot' the landscape. This Immortal Mountain is not intended to imply a timelessness, it is occupying the conceptual space of a 'contemporary' landscape.

Scottish sculptor Kirsteen Pieterse is based in both Hong Kong and Australia. Her current work fuses an interest in traditional Chinese ink landscape painting and contemporary large-scale engineering construction and infrastructure. Her work attempts to call to mind the massive engineering projects which rip into the beautiful Hong Kong landscape. Her studio is located in an area surrounded by mountains often shrouded in low cloud and giving them a direct visual link to traditional Chinese landscape painting featuring mountains and mists. Currently there is much upheaval due to the construction of an extension to the mass transit railway network. The juxtaposition of these two elements has been dominating her studio practice.

Kirsteen holds a Master of Arts (Architecture) from the University of East London and a Bachelor of Fine Art, First Class Honours from the Glasgow School of Art. All five of her solo exhibitions have been staged in Sydney at Martin Browne Fine Art Gallery including 2015's Scholar Stones – Interpretations. In 2005, Kirsteen was a finalist National Sculpture Prize finalist in The National Gallery of Australia's group exhibition. Other group shows featuring her works have been held in Sydney, Melbourne, Perth and Hong Kong. Works feature in collections held in the UK, Hong Kong and Australia. Aside from winning the Wyndham City Council Acquisitive Award in 2008, Kirsteen was also awarded the Viewers' Choice Award at the 2004 Woollahra Small Sculpture Prize.

Kirsteen Pieterse, in conversation with Professor Ian Howard, discusses her work Immortal Mountain and answers questions from the audience. Recorded on 15 October 2016 at the exhibition.