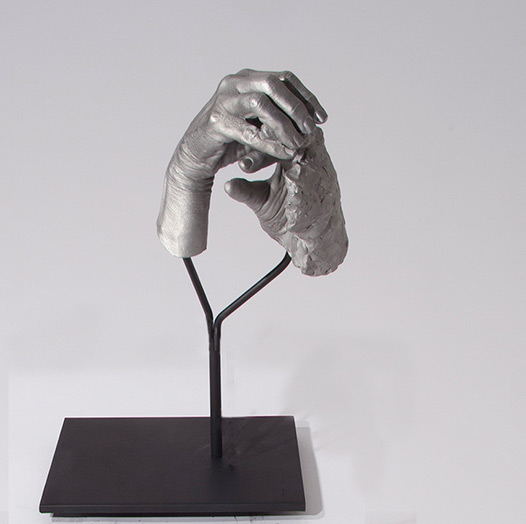 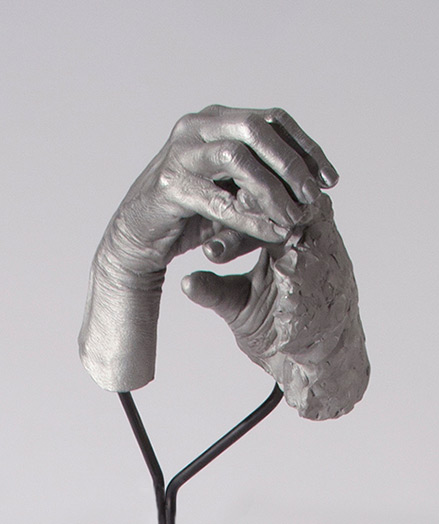 One Hand Making the Other Hand (Instrument Series)

This is a small version of a larger work from a sculptural series titled Instruments 2015. Each work in the series uses hands to create a relationship between gesture, performance and sculpture. One Hand Making the Other Hand suggests a process in motion that is captured like a photographic still holding a moment in time.

There is a poetic dimension to this work also as it suggests that the artist's hand or creative will is capable of recreating itself. The work is rendered in aluminium to emphasise the hand as an instrument much like a medical apparatus or technical tool.

Julie Rrap has been a major figure in Australian contemporary art for over 30 years. Since the mid-1970s, she has worked with photography, painting, sculpture, performance and video in an on-going project concerned with representations of the body.

Her work has been selected for numerous international and national exhibitions including the 1986, 1987, 1992 and 2008 Sydney Biennales and the 2007 Auckland Triennale, Gyeungei Museum, Korea 2011 and Jakarta Biennale 2011, The New Media Gallery, Vancouver 2014, Ian Potter Museum of Art, Melbourne 2015. Rrap was short-listed for the Helen Lempriere National Sculpture Award, 2002; the National Sculpture Prize 2003 at NGA, and the Clemenger Contemporary Art Award at NGV, 2009. In 2001, she won the Hermann's Art Award, in 2008 the Redlands Art Prize and in 2009 the National Artist's Self-Portrait Prize. In 2007, a publication and 25 year survey exhibition Body Double was curated at the Museum of Contemporary Art, Sydney by Victoria Lynn.

Rrap's works are held in every major public collection in Australia as well as many corporate and private collections in Australia and overseas. She currently exhibits with Roslyn Oxley9 Gallery in Sydney and Arc One Gallery, Melbourne.