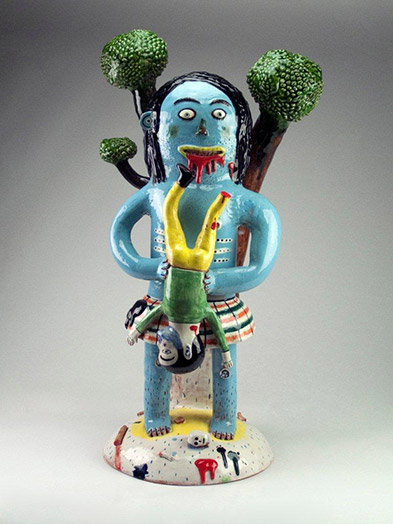 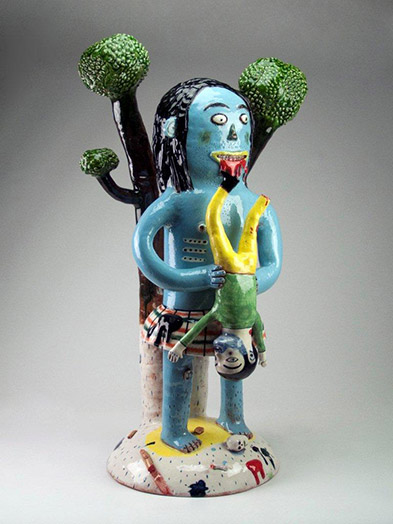 Man's fear of destructive forces - whether predatory, natural, mental or emotional - are the things I try and give concrete form to in recent works. My modelled and painted ceramic forms idiosyncratically re-interpret the 18th and 19th century ornamental and souvenir wares that were mass-produced in factories in places like Stoke-on-Trent and Staffordshire in the British Midlands. While these pieces appear traditional at first glance, the subjects are always subversive responses to contemporary aspects of popular culture, history, war, violence, politics and religion, within universal themes such as love, death, birth and life.

Born 1964 in Stoke-on-Trent, Stephen Bird lives and works in Sydney and Dundee in the UK. He has been based in Sydney since 2007 where he lectures at the National Art School. Stephen studied Fine Art at Duncan of Jordanstone College of Art in Dundee, and postgraduate studies at Cyprus Art College. He initially trained as a painter but now works across a range of mediums including ceramics, drawing, printmaking and digital animation.

Stephen has exhibited extensively for over 20 years in the UK, USA and Australia. Collections include National Gallery of Australia, National Museum of Scotland and National Museums Northern Ireland. He has undertaken a number of significant commissions and is featured in many books including Contemporary Ceramics, International Perspective by Emanuel Cooper, published by Thames & Hudson 2009. Stephen is represented by Olsen Irwin Gallery, Sydney and Gould Gallery, Melbourne.