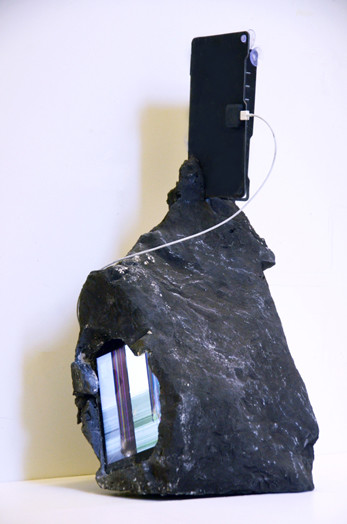 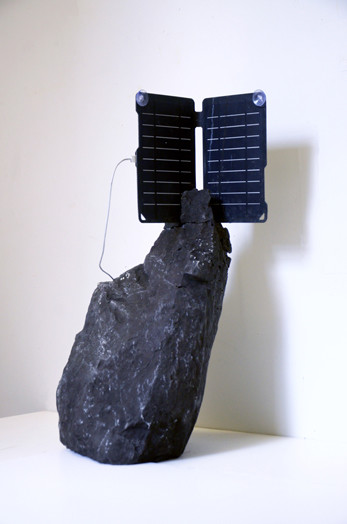 Harbour Archaeology (petrification structure for a carpark) presents a video of an individual, small and in silhouette, hammering at the surface of the water of Sydney Harbour. Amidst the iconic structures of the city and the everyday happenings on the harbour, the intention of the action is not clear but tends towards the comic or the futile, as the ephemeral shimmering of the water repeatedly gives way before closing back on itself and the city goes on unaffected. Replayed on an iPad cast into a concrete rock, and powered by a solar panel emerging from it, this documented action has become contained - it is solidified in a system which structures it, and its continued visibility contingent on the artificial light source of the gallery spotlight.

This work is part of an ongoing series which examines how experiences of wonder and intentionality can be documented and persist within the social and political structures in which individual action occurs.

Julian Talarico is a visual artist working across sculpture, installation, video and performance. His practice interrogates the physical properties of everyday materials, and in combination with kinetic and time-based elements creates spaces that reference states of duality, resistance and transformation. His works often function as 'object systems' which explore everyday experience and its potential to generate and record states of wonder and meaning.

Julian completed his Bachelor of Visual Arts at Sydney College of the Arts in 2015 and continues to live and work in Sydney, Australia.