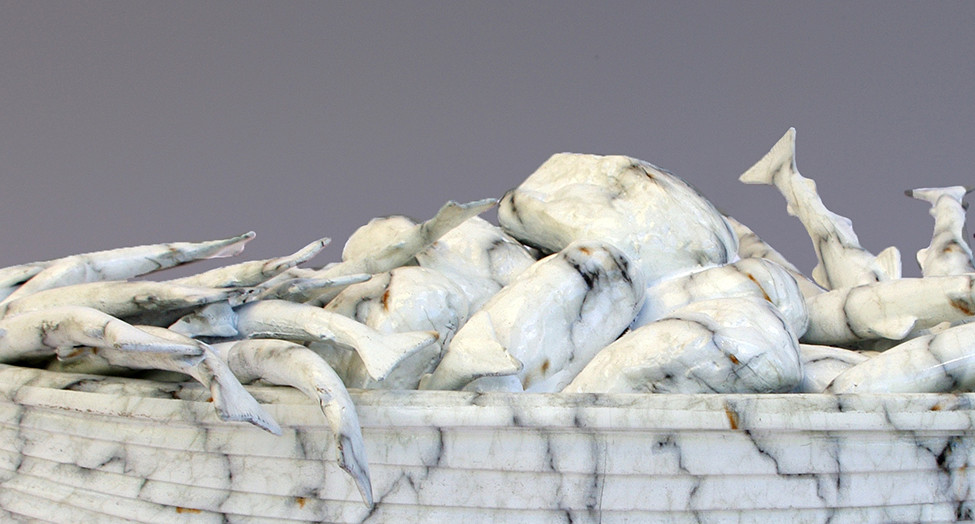 Fishes and Loaves - Set in Stone

This sculpture proposes a cautionary speculation about a future world diminished by the quantity of our remaining environmental and global resources. The boat form is used as a metaphor to engage in both the transformation of material and the reconstruction of a recorded event. The sculpture reminds viewers of the ancient biblical story of the fishes and loaves and the feeding of the hungry masses. Laden with food it acts both as a metaphor for our overcrowded planet and as a memory prompt of that early story of hunger. The title Fishes and Loaves - Set in Stone directs attention to the cast aluminium form with its hydrographic printed surface that mimics classical marble.

David Hamilton was born and educated in Hobart, Tasmania. For 30 years, until 2002, he was Head of Sculpture at the University of Tasmania in Launceston. He presently works as a full time practicing artist and during 2011 completed a PhD titled Fragments: Beyond the Object. David's practice includes sculpture, installation, drawing and digital media. His particular area of specialisation is metal casting as well as working in steel and wood, sometimes in combination.

Throughout his career David has frequently used his art as a tool for political commentary, often related to the loss of Tasmania's native old growth forests. This theme was brought out in an installation constructed from wood chips at Spring Bay Mill as part of 2015 Ten Days on the Island Festival. A 2016 residency at the Cité Internationale des Arts in Paris renewed his interest in the object as vector for the narrative.