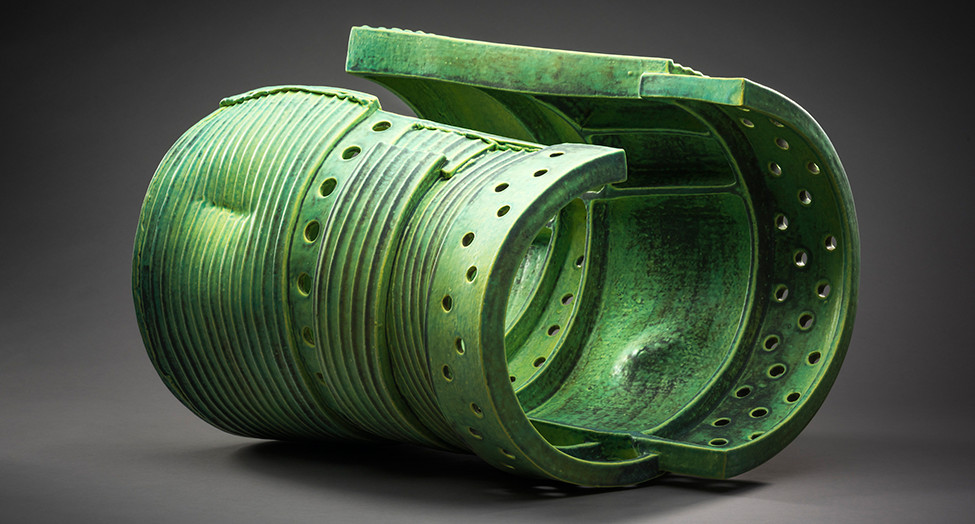 This work expresses the contrast between the extremes of country and city. Influences from my rural childhood combine with the urban confines of city life to produce objects connecting in ways that explore mutual survival.

Inspired by old water tanks and buckets, often with rusted metal and distorted shapes, lying discarded in a farm gully or machinery yard, these remind of the impermanence of material. This is a mnemonic device, suggesting the way that old discarded barrels and buckets from previous usages leave their mark. As a material, clay can mimic a metal surface, exploring textures, surface and the marks of time.

Merran Esson is an Australian artist who has been making works of art using clay for over 30 years. She was awarded the Austceram Award (1994), Port Hacking Award (2000), Gold Coast Ceramic Award (2005), NAVA Marketing Grant (2006), NAS Studio Residency at The Cité Internationale des Arts Paris (2006), Poyntzpass Pioneer Ceramic Award (2008) and highly commended in The Woollahra Small Sculpture Prize (2014). She has been a visiting artist in China, Korea, Scotland, Sweden, Taiwan, Japan, Spain and Pakistan.

She has recently retired as the Head of Ceramics at the National Art School in Sydney, and works from Square One Studios. Merran is a member of the International Academy of Ceramics, Switzerland, and is represented by Stella Downer Fine Art in Sydney.

Merran Esson, in conversation with Professor Ian Howard, discusses her work Fragment. Recorded on 14 October 2017 at the exhibition.