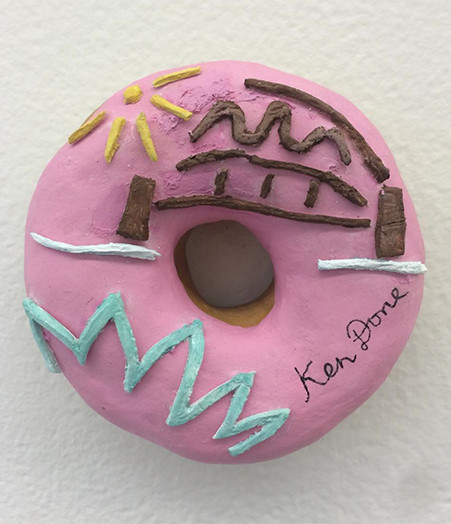 Ken Donut is the latest in a series of ceramic sculptures that pay tribute to the contemporary Australian artists I admire, sprinkled with playfulness and iced so thick with affection you'll have to brush your teeth after looking at it.

Sure this piece has some holes in it, well really just one hole actually, but I donut know what we can do about it.

Every year 133 million human babies are born, and in 1988 Kenny Pittock was one of them. In 2008 Kenny received a scholarship to complete a Diploma of Visual Art at Swinburne. The following year, he died. (He didn't really; he just had major spine surgery.) Between 2010 and 2013, he completed a four year Honours degree at the Victorian College of the Arts, and although majoring in painting, he works across a large range of mediums including ceramics, drawing, text and photography.

Using humour and sentimentality to playfully respond to contemporary Australian culture, Kenny Pittock is having fun with the overlaps and boundaries between the public and the personal. He is currently working full time from his studio in the Nicholas Building, Melbourne. His work is featured in many collections including the City of Melbourne State Collection and the Melbourne University Union Collection.

"I've been lucky enough to show my art in some pretty amazing exhibitions," says Pittock, "but nothing compares to the time I kicked an apple core through a basketball ring from half court using my left foot."