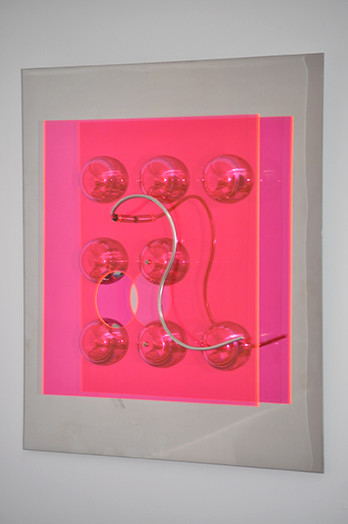 The reverence created by the aesthetics of modern technology. My interest has always been in the creativity and combination of art and science, to see the meaning in the world around us. On July 4th 2005, a NASA rocket was programmed to collide with a comet passing between the earth and the sun. In the spectrum of light passing through the ejected debris generated by the collision, scientists identified the presence of the four elements that could have evolved into living entities. This scientific voyage corroborated the ancient belief that life came from the stars.

Mike Kitching was born in Hull, England, migrating to Australia in 1952. He comes from a family of builders going back to 1722 in Yorkshire, including his father who was also a military trained engineer who built an oil refinery in Hull and was deployed to North Africa. After the family migrated to Australia, his father also helped to build Kurnell Oil Refinery in Botany Bay, so the combination of art/science and building/technology come very naturally to him.

Mike describes his art as "the reverence I give to the meaning of life". He has been a finalist in the Woollahra Small Sculpture Prize a number of times, and his works are held in numerous galleries, both nationally and internationally as well as private and public collections. Solo exhibitions include a number at Barry Stern Galleries and his awards include the Blake Prize for Religious Art, the Manly Art Prize, Taffs Prize for Painting and the Arthur Phillip Sculpture Prize.

Mike Kitching, in conversation with Professor Ian Howard, discusses his work Multiple 1 and answers questions from the audience. Recorded on 14 October 2017 at the exhibition.