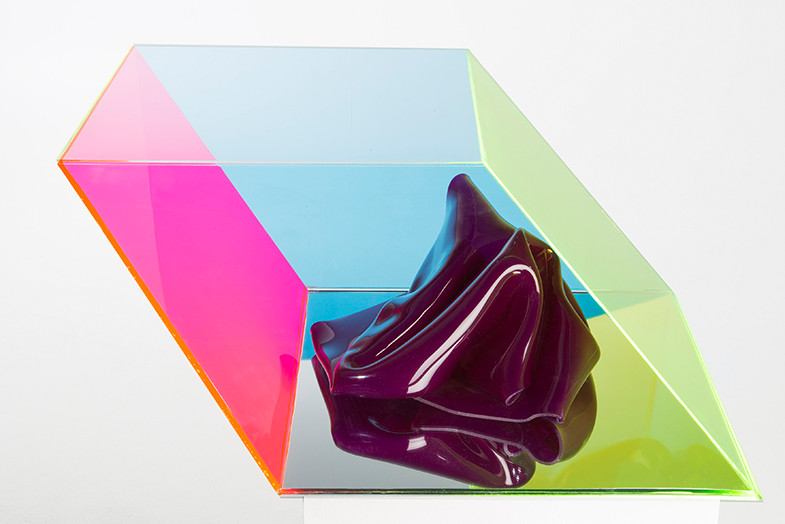 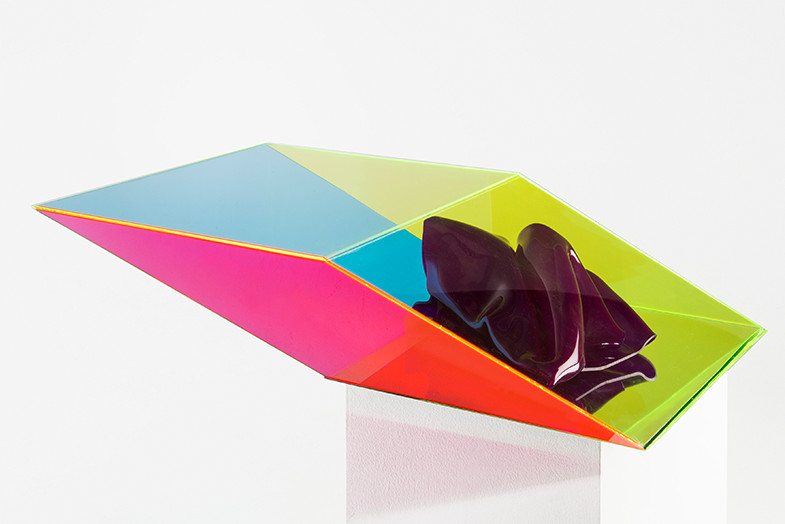 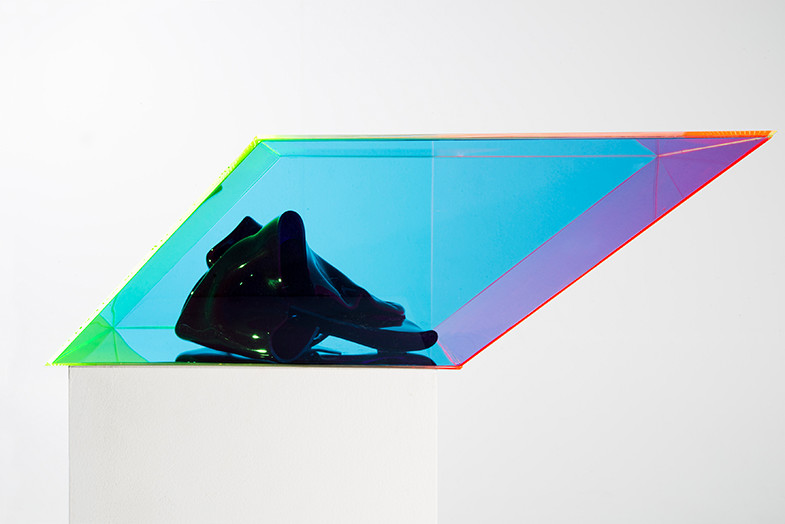 The title North West Passage refers to the historical search for a trade route from Europe to Asia between North America and the Arctic. Metaphorically I am referring to the aesthetic continents of geometrical and biomorphic abstraction through which I hope to chart a course and find a middle point that leads, not to the spices of Asia, but the quantum effects of light and colour.

I begin the journey in this work by placing an amorphous acrylic slump inside a 'parallelepiped', a geometrical object formed by three pairs of parallelograms. Each face of the work performs a different function in relation to colour and light. At the centre is an opaque purple, encased in a transparent fluorescent orange and green, a transparent blue, a mirror base and two clear faces that establish an ideal yet temporary viewpoint.

Moving around the work, light and colour are transmitted like optic fibre from each side of the work creating parallel bars and pools of non-localised colour, redoubled by the mirror in the base. The purple slump, encased in either a tomb or cabinet of wonder, functions as a kind of joystick for a dashboard of visual readouts and chromatic flourishes.

Mark Titmarsh (born 1955, Ingham, Australia, PhD, UTS, 2009) is a visual artist working in painting, video and writing. His paintings and screen work are currently held in public collections across Australia, including the NGA, NGV, AGNSW, QAGOMA, AGWA, MUMA, NFSA, and in private collections in Europe and the United States.

In the 1980s he established an international reputation as an experimental filmmaker exhibiting in Europe, North America and South America winning awards at Ann Arbor and Montreal International Festivals. In Australia he was a significant contributor to the development of the postmodern debate in the visual arts in his role as co-editor of the visual arts magazine, On the Beach, and as a new image painter. In the 1990s he co-founded the Sydney based artists group Art Hotline that exhibited ephemeral works in non-gallery everyday sites.

His current work executed under the rubric of 'expanded painting' is painting about painting, or painting that dissimulates into objects, videos, performances and texts. His book Expanded Painting is to be published by Bloomsbury in 2017. He is currently a tenured, part time lecturer in the Faculty of Design, Architecture and Building, University of Technology Sydney (UTS), where he teaches Interdisciplinary Studies.

Mark Titmarsh, in conversation with Professor Ian Howard, discusses his work North West Passage 2 (2017) and answers questions from the audience. Recorded on 14 October 2017 at the exhibition.