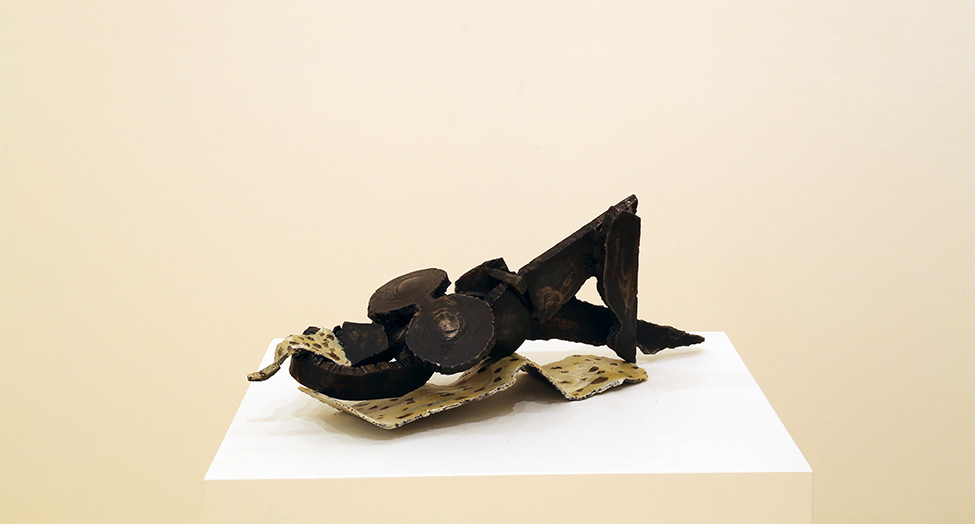 Nude on leopard skin is one of a series of small steel figure sculptures exploring intersections between human and animal environments. It features a contorted female nude on a leopard skin, possibly suggesting indulgence, greed and a growing disregard for the other animals of our natural world. Ultimately, however, my sculpture has to stand alone to engage with the viewer's own perceptions and experience.

Rodney Pople was awarded a Diploma of Fine Arts (Photography) at the Tasmanian School of Art and completed postgraduate studies in sculpture at the Slade School of Fine Art in London and the New York Studio School. He has been awarded international residencies in Paris and Beijing, where he was Australia's first Asialink artist-in-residence at the Beijing Art Academy.

Early career exhibitions included Perspecta and Mindscapes (both Art Gallery of NSW). Pople's work is represented in Sydney and Melbourne by Australian Galleries and in Tasmania by Despard Gallery. In 2014 his work was the focus of a solo exhibition at the Australian Centre for Photography. Pople's work is in the National Gallery of Australia and most state galleries, in university, corporate and private collections, including those of Russell Crowe, Spike Jonze, the Lowy family and Newington College, Sydney. He has been the recipient of various grants from the Australia Council for the Arts. In 2016 he won the Paddington Art Prize and has previously also been the recipient of awards including Tasmania's Glover Prize, 2009 NSW Parliament Plein Air Painting Prize and the 2008 Sulman Prize, Art Gallery of NSW.