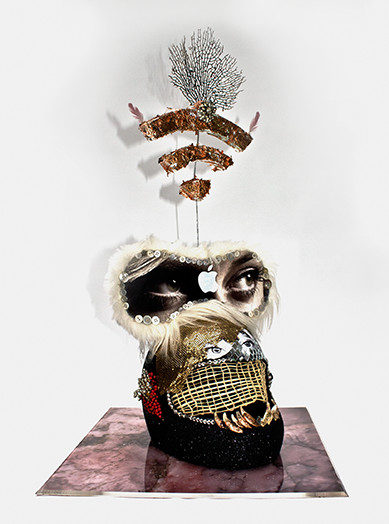 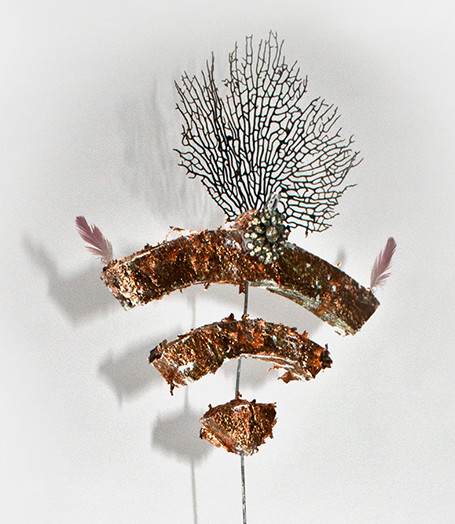 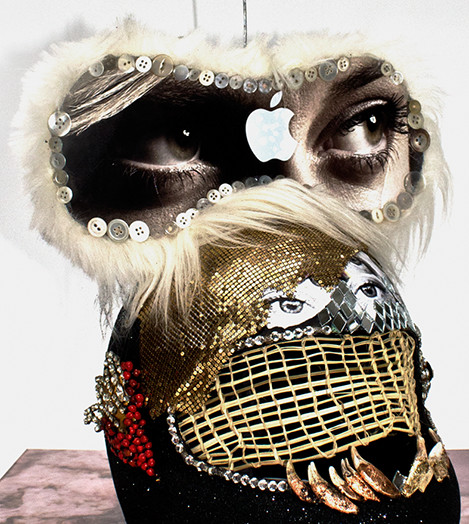 searching for a connection [planned obsolescence]

The idea for this work began while I was on residency in India. Here I became obliquely aware of how much the choreography of my movements was influenced by the invisible presence of 'WI-FI hotspots'. Here too I observed women wearing traditional dresses, colourfully printed and embroidered with the Mac Apple logo, though I'm almost certain they could not afford Apple products. Apple, the age old symbol of desire.

This object, combines 'natural' and 'man-made' materials, playfully drawing attention to the power of the original and the copy, referencing the fetishised notion of brand power, symbols, and the inherent magic of technology. I was thinking about the currency of data and the absence/presence technology promotes/enables.

I have used more of a Dada approach, merging the ridiculous with sobering truths. Totems of invisible forces, such as the WI-FI symbol crowned with a coral I collected from Koodankulam beach, next to a contentious nuclear reactor. All seeing eyes, pseudo precious materials from casino showgirl outfits combined with detritus sourced from the streets of Hobart and Kochi all pieced together with gold leaf, glitter and dog's teeth sourced from a 1950s dumping ground from the Hobart pound.

Selena de Carvalho is an emerging, cross-disciplinary artist whose practice responds to notions of personal ecology. Selena completed her Bachelor Degree in 2011 (for which she was awarded the Jon Lajos Prize), receiving First Class Honours and the Jim Bacon Award in 2015 from the Tasmanian School of Art. In 2012 Selena received an Australia Council JUMP Mentorship and an ArtStart Grant, and she was the 2013 recipient of the Dombrovskis Award for her project Forecast (the anatomy of change).

Her work has been exhibited extensively across Australia as well as in North America and Hong Kong. Selena has participated in residencies in China, India and France. During 2016 she was studio resident at CAT (Contemporary Art Tasmania) and the 2016 recipient of the prestigious Schenberg Art Fellowship for her work Ecological Haunts (ii) exhibited as part of Hatched at PICA (Perth Institute of Contemporary Art). The curatorial board described the work as "both intricate and affecting. It is a work that is experiential in the best possible sense, with the ability to draw viewers into its poetic sense of mystery and magic. Both subtle and sophisticated, the work allows for different levels of engagement, moments of solitude and room for contemplation".