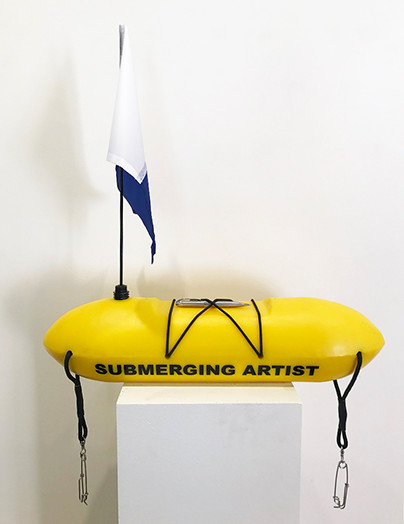 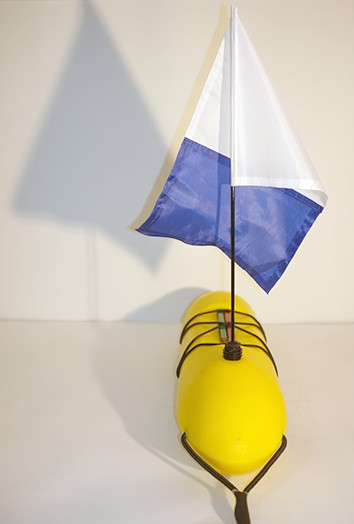 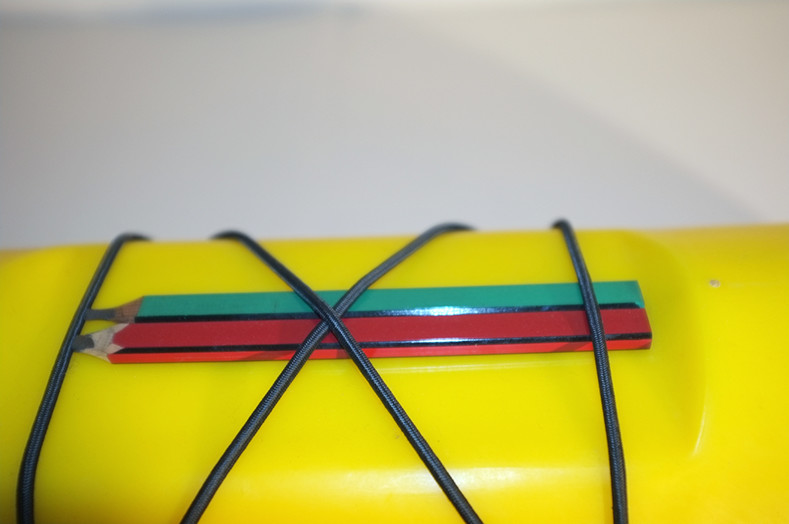 Diving into the unknown, diver down, with a buoy marking the spot to keep other boats at bay. A blue and white flag with a distinctive angled shape. On the dive buoy two builders pencils are ready, in red and green, each waterproof and ready for making marks and notes when needed. If sculpture is a thing, why not a floating thing? A point in an ocean of unknowns hiding beneath the surface, which the artist is diving to see and record. The artist is hidden, absent, but active, continuously seeking. The artist is on loan from the world of air and sky, perilously present in an underwater seascape where anything can happen.

Another reading of Submerging Artist springs from rejection, when things aren't going the way that the artist hoped. So many people emerging, and so many working hard but hardly acknowledged. As Anselm Kiefer said (remembered, source unknown): "You can work for a lifetime and be forgotten at once".

Richard Kelly Tipping is internationally recognised for his sign art, using templates of official signage to make poetic shifts in meaning. Tipping is also known as a word sculptor and visual poet represented in many major collections including extensively in the National Gallery of Australia and Art Gallery of New South Wales. The British Museum collection includes 56 of his screenprints, as does the Museum of Modern Art in New York.

Tipping's public art projects include the well known Watermark steel sculpture ('flood') on the Brisbane River, and the 'art fence' Swerve for the Adelaide Showgrounds which is 100 metres long and made of over 1000 cast-aluminium pickets. In 2016 he became a member of Sculpture by the Sea's 'Decade Club' after exhibiting ten times. The giant signwork Kangooroo, shown in 2016 at SxS Bondi, will be installed at Barangaroo for three weeks in August 2017.

Tipping's poetry and word works have been published in books including Subvert I Sing (Redfox Press, Ireland, 2008) and Off the Page & Back Again (Writers Forum, London, 2010). A new collection of his poetry is in preparation.

He lives and works in both Sydney and Newcastle.