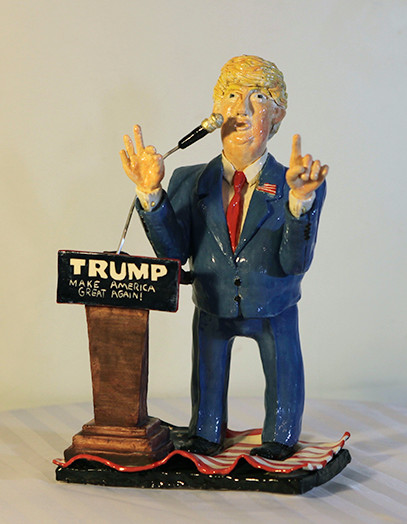 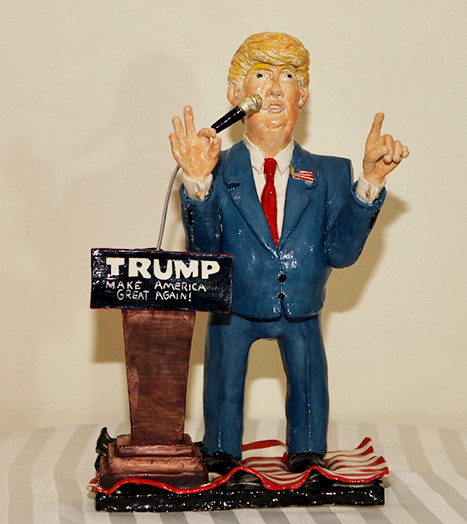 I started this journey of Donald Trump way back when he was elected President of the United States in November last year. I was in my pottery class and had almost finished my previous work and for my next project I wanted to create a wacky and eccentric sculpture. So I decided to create The Donald. It was not until midway through February this year when I actually started making the sculpture. It is a caricature of the American President and it has taken me around six months to complete.

Michael Harrell is a 15 year old sculptor and is in Year 10 at The Armidale School. He has been making sculptures with clay since he was 4. His lifelong teachers are professional potters Suzanne Forsyth Hatch (maker of the Dame Edna teapot) and Rick Hatch. As well as being a successful sculptor, he is also a keen filmmaker - acting, writing, directing and shooting his own films. For the last couple of years, Michael has also been involved in a variety of local theatre performances.

Ceramic sculpture is a passion of Michael’s. He has been entering local ceramic sculpture competitions in his home town of Armidale and has been winning them for at least 6 years. This year, he decided to challenge himself further and make a work for the Woollahra Small Sculpture Prize.

Michael Harrell, in conversation with Professor Ian Howard, discusses his work The Donald. Recorded on 14 October 2017 at the exhibition.