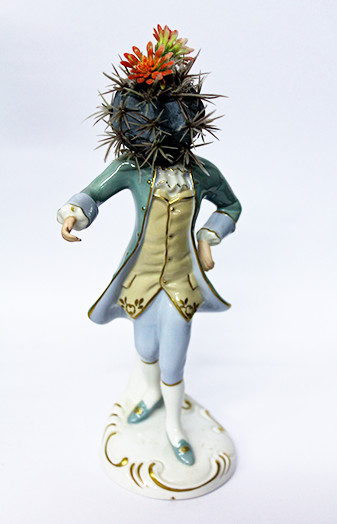 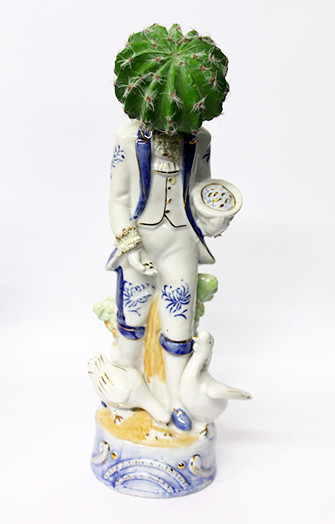 While working in the studio, happy accidents such as the beheading of my faux colonial porcelain figure, created the perfect opportunity for 'The arrival of the Ferals'. There is a moment of clarity when two disparate collected items scattered amongst the flotsam and jetsam of the studio bench come together to create a humorous and poignant narrative. We are the ferals who have landed on this island, and more than any other introduced species we continue to have the largest and most profound impact.

Mariana del Castillo graduated with a Bachelor of Arts from the ANU School of Art in 1989. She has had many solo exhibitions including 2017’s Her Soundtrack at Redfern’s Bearded Tit, Fugitive Faith at the Fitters' Workshop in Kingston and Remnants of a ritual past (Canberra Contemporary Art Space). She was also invited to exhibit Fugitive Faith – A conscripted oath at the Canberra Museum and Gallery and was Concept Costume Designer for the production Red Dress in Denmark.

Mariana has been invited to exhibit in numerous group exhibitions including Small sculpture at Beaver Galleries, Sculpture at Maunsell Hughes, Woollahra, Bad Girls (CCAS) and Something in the air (CMAG). She has received numerous grants to fund her work. In 2015 she was invited to showcase her work in Contour 556 at Commonwealth Place East Gallery Space, Footy Fever at CCAS, Art + Climate = change at the Australian Galleries, Melbourne and Protest (M16 Artspace).

Mariana was a 2008 finalist in the Domain Project, winner of the 2013 Lakeside Exhibition Award, a recipient of the 2009 CAPO Rosalie Gascoigne Award, and was awarded the 2015 CAPO Macquarie Wealth Award. She was art critic Peter Haynes' top five picks for 2014. Her works are held in public and private collections in Australia, UK, Ecuador, USA, Germany and Denmark.