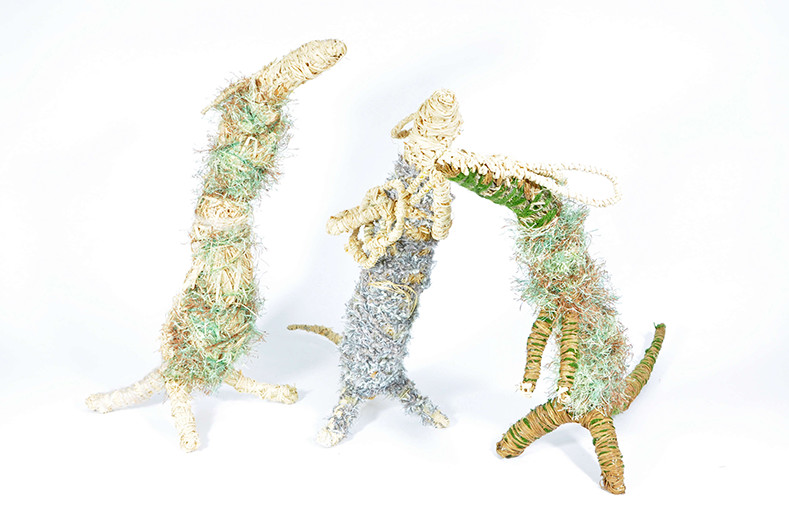 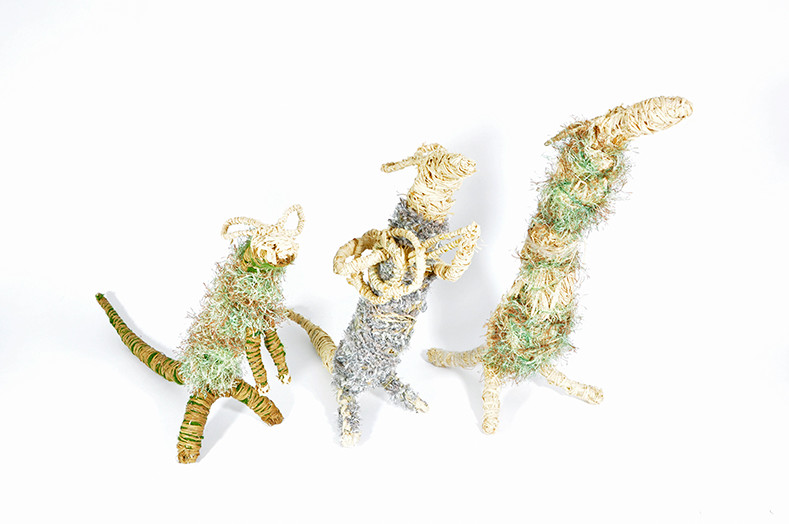 Rene Kulitja is a well-known Tjanpi artist from the remote community of Mutitjulu in the Northern Territory, whose sculptural works are imbued with a charming wit, and are innovative creations profoundly influenced by Anangu traditions of storytelling. She has a great love for singing, and her nostalgic sculpture Three Blind Mice reflects her memories of singing her children nursery rhymes when they were young. Rene's sculptures often feature the animals from her desert home and explore their cultural and totemic importance.

"Pala palunyaya kanyini, kalaya, kutjupa tjuta panya kanyini papa tjukurpa, kuniya tjukurpa, liru wanampi, waru tjukurpa, walawuru, tjala, maku, tjukurpa ngaranyi ngura ngaranyi anangu tjukurpa tjara nguraritja."
"We all carry skin names and totemic ancestors, like emu. Everyone has something, such as dingo Tjukurpa, woma python Tjukurpa, rainbow serpent Tjukurpa, fire Tjukurpa, eagle, honey ant, witchetty grub. These are all Tjukurpa, in the land and in the people who are associated with that land. My totemic ancestral Tjukurpa, for me, is an experienced sensation, and not just an animal or an object that I can point at and experience as a physical thing." (Translation by Linda Rive)

Rene Kulitja was born at Ernabella, where she grew up, and later lived at Mutitjulu. She is a well known artist whose works have been exhibited nationally and internationally, with one of her designs featuring on a QANTAS plane. Rene has been a member of Mutijulu Community Council and Uluru-Kata Tjuta National Park Board of Management. She was a founding director of Walkatjara Art at Uluru and is chairperson of Maruku Arts Governing Committee.

Rene is a dedicated Tjanpi weaver and until recently was a Director of NPY Women's Council. She is a strong cultural woman and a superb traditional dancer. Rene's sculptural works are imbued with a charming wit, and are innovative creations profoundly influenced by Anangu traditions of storytelling. A highly skilled and inventive artist, Rene has participated in a number of artist camps, collaborating on many large scale works for national institutions. Most recently she was a part of the Tjanpi Desert Weavers/Fiona Hall collaboration which resulted in two installations commissioned for the 2014 TarraWarra Biennial. One of these installations, Kuka Irititja was then selected to be included in the 2015 Venice Biennale, as a part of Fiona Hall's exhibition Wrong Way Time in the new Australian pavilion. Rene travelled to Venice to attend the opening and represented Australia and Tjanpi Desert Weavers.

Tjanpi (meaning 'dry grass') evolved from a series of basket weaving workshops held on remote communities in the Western Desert by the Ngaanyatjarra Pitjantjatjara Yankunyjatjara Women's Council in 1995. Building on traditions of using fibre for medicinal, ceremonial and daily purposes, women took easily to making coiled baskets. These new-found skills were shared with relations on neighbouring communities and weaving quickly spread. Today there are over 400 women across 28 communities making baskets and sculptures out of grass and working with fibre in this way is firmly embedded in Western and Central Desert culture. While out collecting desert grasses for their fibre art, women visit sacred sites and traditional homelands, hunt and gather food for their families and teach their children about country.

Tjanpi Desert Weavers is Aboriginal owned and is directed by an Aboriginal executive. It is an arts business but also a social enterprise that provides numerous social and cultural benefits and services to weavers and their families. Tjanpi’s philosophy is to keep culture strong, maintain links with country.