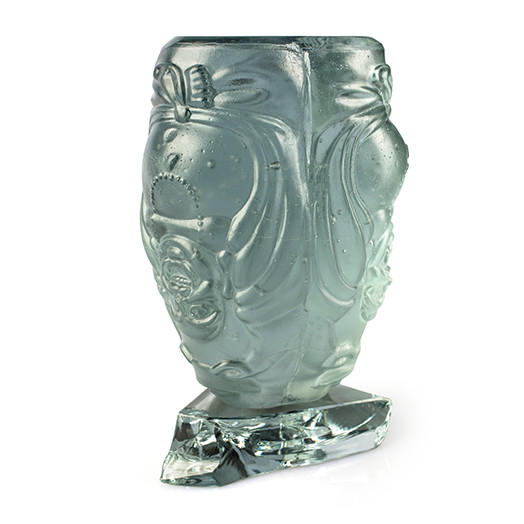 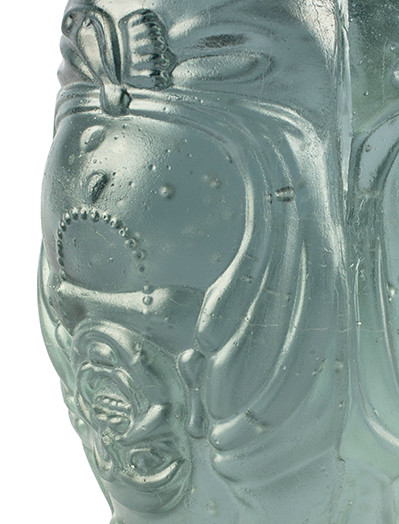 In 2013, I began this current project of returning the mass-produced image of the Buddha for popular consumption to the realm of the particular and the handmade, beginning in the ceramic medium at a time when 'wonky pots' were considered 'the new video'. TV screen Buddha: Ode to Nam June Paik (2017) continues the handmade process through the medium of solid hot-formed, cold-worked glass from recycled TV screens in a unique artwork created at Canberra Glassworks.

Referencing Nam June Paik's TV Buddha series and, in particular, the father of video art's Standing Buddha with Outstretched Hand (2005), the work deliberately inverts the three-sided Buddha, perched on a polished shard of TV screen, and asks us to pause and internalise the perpetual self-reflexivity of the moving image, reducing an endlessly perpetuating subject to the singularity of the object. Here the medium becomes the message, transmitting eternity through the swirls of tiny light-refracting bubbles of glass.

NOT is a self-taught artist having originally trained as an interior designer and currently Director of Square One Studios in Alexandria. Immersed in ceramics as a member of claypool and with training at Gymea TAFE, his ceramic installations were shown at Hazelhurst Regional Gallery as part of Glazed & Confused (2014-15), and have been exhibited regularly at Kerrie Lowe Gallery, Stanley Street Gallery and, most recently, with Kronenberg Wright Artists Projects.

In late 2016, NOT began working with Canberra Glassworks to produce a new series of installations made from hand-etched lead crystal and recycled TV screens, including Song dynasty and TV screen Buddha (both 2017). In August 2017, NOT's work was shortlisted for both the Woollahra Small Sculpture Prize and the Little Things Art Prize at Paddington's Saint Cloche Gallery.