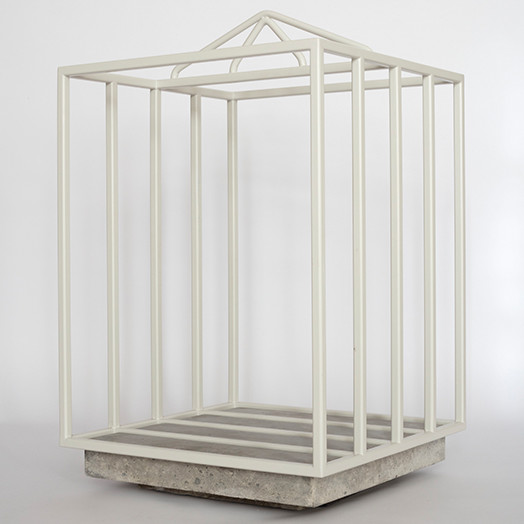 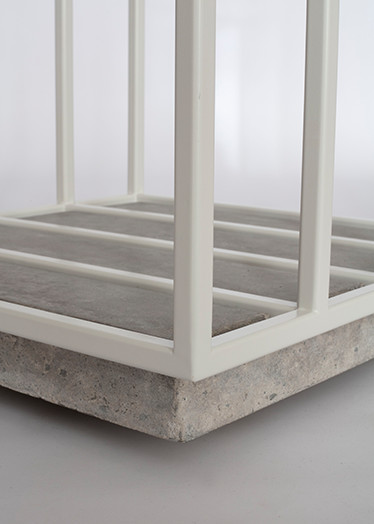 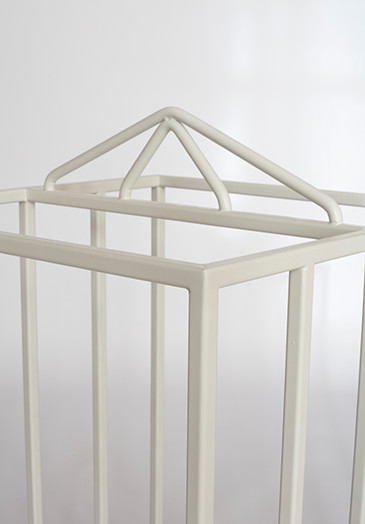 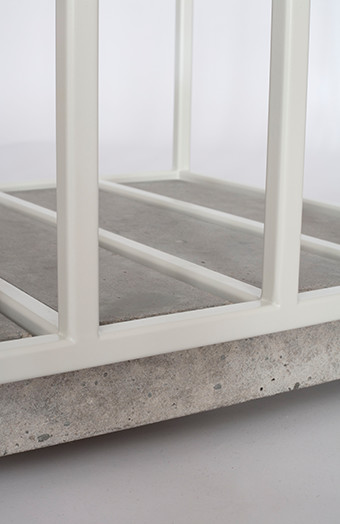 My sculptural practice involves the transformation of everyday industrial equipment into formal painterly compositions. My way of working is singular as I am fully engaged in all aspects of the production of the works, including the welding of each object. In the past, I have created works based on trolleys, O'Brien glass carriers and utility vehicle Hilux trays, flatbed trailers and more recently, industrial box frames. I have an ongoing interest in the exactness of scale, proportion and weight distribution, the characteristics of which I translate in a process of formal distillation.

Box Study for Industry is part of an ongoing series of sculptures, which investigates structures usually found in factory settings and used to hoist heavy materials. However in an ordinary worksite setting, industrial equipment is slave to its function - often clunky, brutish and made to certain specifications. Here I remove the utilitarian features such as castors and latches and replace thick for ultra fine metal stock. The resulting refined sculptures comprise of slender steel-frames that slot subtly into custom cast and polished concrete bases. They continue a formal investigation of negative space, line-work, colour shifts and a subtle play of scale and materiality.

Courtesy of The Commercial, Sydney

Bonita Bub (b. 1982, lives Sydney) is a sculptor who produces elevated replicas of industrial equipment and furniture in materials and with processes upgraded and more highly-refined than their expressly functional, mass-produced prototypes. Her selection of and improvements to found design (stainless steel over mild steel, perfected welds, etc.) are part of a subtle conversation between form, function and aesthetics in which she draws almost solely on her own technical skill and labour.

Superficially, Bub's work is ego-less and academic but it becomes quickly apparent that it is motivated by sophisticated and idiosyncratic formalist concerns and an acute sense of beauty. Her close attention to colour (powder coatings, sometimes predetermined by colour standards) and the occasional appearance of canvas or canvas-like materials reveals her practice as invested in the field of painting within sculptural dimensions.

Bonita was awarded a Master of Fine Arts (Painting) at Sydney College of the Arts in 2012. Work towards her Master's degree included twelve months  in Vienna in the Heimo Zobernig class at the Akademie der bildenden Künste (2011). At the end of 2017, she exhibited Box Study for Industry I, a major outdoor sculpture, in the outdoor sculpture court at The Commercial. Other recent solo exhibitions include Minerva, Sydney and Knulp, Sydney (both 2017). She has presented regular solo exhibitions and participated in group exhibitions in artist-run initiatives and university galleries for over a decade, especially in Sydney but also Vienna and Glasgow. In 2013, she exhibited at The Commercial as part of the group exhibition, JANIS II, co-curated by Kelly Doley and Amanda Rowell.