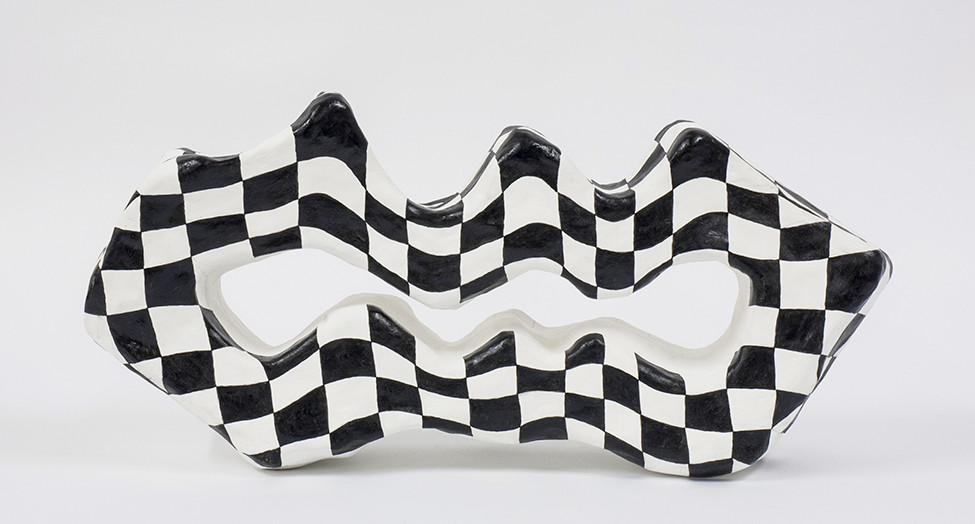 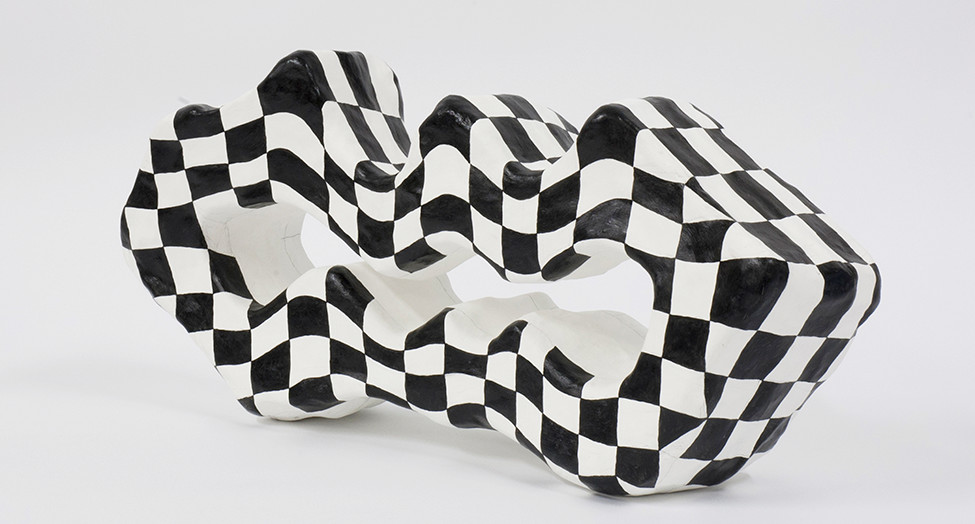 Fabric #2 is a cast composite sculpture that plays with the iconography of power, order and concepts of hazard and authority. The topographical chequered grid emphasises the underlying corporeal form but also disrupts and disguises it. This landscaped form seeks to be anonymous and hidden but also becomes 'coded', pinned down by the highly contrasting surface.

The duality of intention and outcome displayed in this sculpture was influenced by the Cosmati brothers' opus sectile (cut marble) floors from c1300 Rome and also the Dazzle ships from the First World War. Fabric #2 began as a constructed wooden sculpture, cut and carved to become a rhythmic negative and positive repeat form. The rhythmical movement having a freedom of intention but also a constraint to conform to the repeat pattern. Fabric #2 was cast in plaster and recast in paper and polymer composite and then painted. Elements of humour and pop iconography are evident in this work.

James and Eleanor Avery have been collaborating on large scale sculpture, installation and public art projects since 2004. James has a first class BA honours degree in Fine Art and an MA from the University of Warwick, UK (1993). Eleanor has a first class BA honours degree and an MA in Fine Art from the Birmingham City University, UK (2000). They are currently based in Brisbane. Their work explores hierarchies and value systems which they reinterpret and reformulate with a sense of humour and postmodern irony. Their practice is strongly collaborative and occasionally competitive, and is driven by this congruence of friction and accord. They use high end fabrication methods in conjunction with a low tech craft approach to explore these oppositional but interconnected conditions.

James and Eleanor exhibit their work internationally with recent exhibitions in Brisbane, Sydney and Rome. Studio residencies include the Cité Internationale des Arts, Paris (2011 Power Institute for the Arts); The British School at Rome (2008 Australia Council); Artspace, Sydney (2007); and Spike Island, Bristol, UK (2005). They have four significant permanent public artworks in Brisbane and Sydney and works held in major collections including Artbank and the Nomas Foundation in Rome.