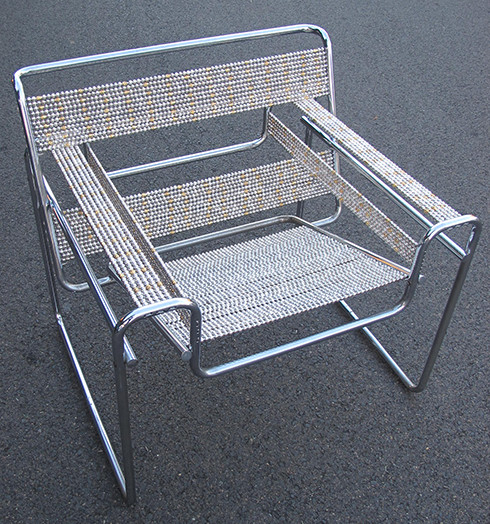 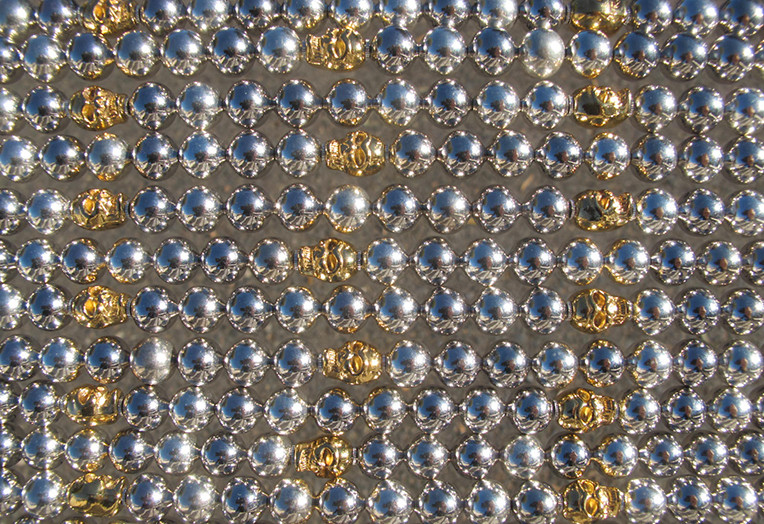 God is in the detail

Marcel Breurer's Wassily Chair embodies the Bauhaus ideal of reconciling art and industry, to make well-designed consumer goods available to the masses. The chair is widely recognized as a 20th century design classic.

God is in the detail is the third of a series of seven iterations of the Wassily Chair reimagined by artist, designer and architect Mathieu Gallois. In these works, the Wassily Chair is stripped back to an allegorical and physical modernist 'frame' and ironically recast as a 'gesamtkunstwerk', an all-embracing art form. Found abandoned on a Bondi street several years ago, this Wassily Chair has been repurposed as a bling sculpture. Bondi, like most Australian suburbs, appears at times to be overflowing with mass-produced consumer goods. As we approach the centenary of the Bauhaus' foundation in Weimar Germany (1919), God is in the detail ponders the success of the modernist project that has resulted in our streets being littered with abandoned well-designed consumer goods. Gallois' 'sinister' and kitsch work of art reflects very real concerns and fears of consumer culture as an endgame, driving environmental collapse.

Mathieu Gallois graduated from the Institute of the Arts, Australian National University, in 1996, completed a Bachelor of Arts in Architecture at the University of Technology Sydney in 2007 and in 2013, he was awarded an Australian Postgraduate Award scholarship to undertake a Doctor of Philosophy at the College of Fine Arts, UNSW.

He has exhibited both nationally and internationally, realising over 20 solo shows and participating in over 30 group exhibitions. Gallois has received several major grants from the Australia Council, has been selected for numerous national art awards including the inaugural National Sculpture Prize, National Gallery of Australia; Helen Lempriere National Sculpture Award, Melbourne; and the McClelland Sculpture Survey & Award. In 2002 Gallois exhibited at the Australian Embassy Paris, France, and received a Samstag Scholarship which enabled him to complete a Master’s Degree at Goldsmiths College in London. Gallois’ work has been exhibited at the University of Technology Sydney Gallery, Sherman Galleries (Sydney), Artspace (Sydney), Western Plains Regional Centre (Dubbo), Carriageworks (Sydney) and The Centre for Contemporary Photography (Melbourne).