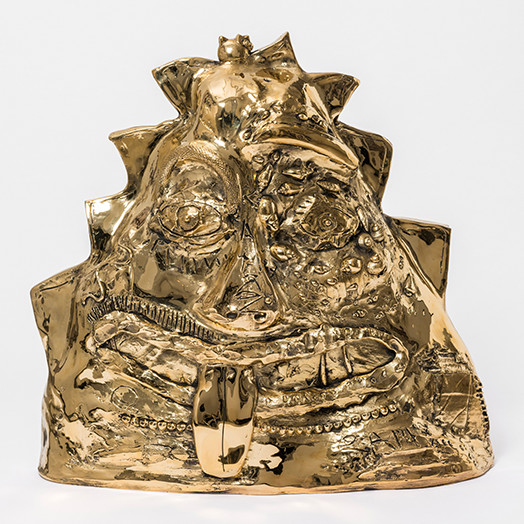 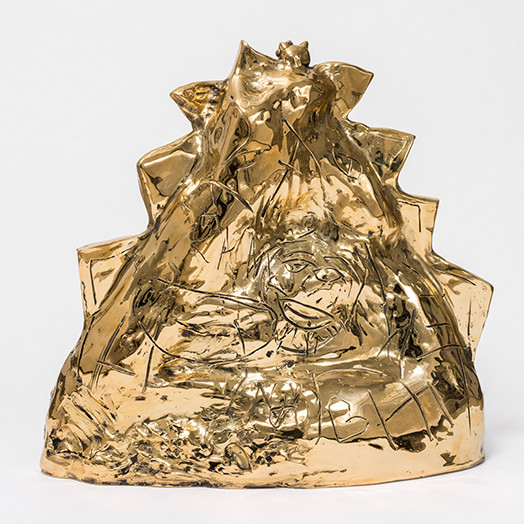 I imagine Pointy Gold Head (2018) as a new age idol. Originally exhibited in the context of large scale installations for the 2018 Dhaka Art Summit and the Encounters sector of Art Basel Hong Kong, it is a celebratory figure that mashes references from the past & present, East & West. He has a grin from ear to ear with a highly polished gold protruding tongue. This stuck out tongue can be interpreted as a gesture of dissonance and/or provocation. It is also a direct reference to representations of the Hindu goddess, Kali.

Materially, the work is a 24-karat gold plated bronze sculpture. Despite this luxurious sentiment, it was cast from an ephemeral work made from unfired clay and detritus. The detritus included shells, rubber hoses, corrugated cardboard and a discarded Hello Kitty toy found during a residency in Taiwan. If you look closely, you can find these things embedded in the surface. The process of making the temporary sculpture was immediate and expressive. Carving, cutting, scratching and pushing brought the figure to life. This libidinal process was then made permanent through the bronze casting and gold plating process which birthed Pointy Gold Head as its current iteration.

Sri Lankan-born, Sydney-based artist Ramesh Mario Nithiyendran creates rough-edged, vibrant, new-age idols. He experiments with form and scale in the context of figurative sculpture to explore politics of sex, the monument, gender and religion. Formally trained in painting and drawing his practice has a sculptural emphasis which champions the physicality of art making. These works are often stacked to form totems or perched atop customised plinths. While proceeding from a confident atheist perspective, Nithiyendran draws upon his Hindu and Christian heritage as reference points as well as a large range of sources including the internet, pornography, fashion and art history. Self-portraits make frequent appearances and the dual presence of male and female organs suggest gender fluid realms of new possibilities.

He has exhibited at various spaces and contexts including the 2018 Dhaka Art Summit, the Encounters section for Art Basel Hong Kong, the Art Gallery of South Australia's flagship exhibition 2016 Adelaide Biennial of Australian Art, and The National: New Australian Art 2017. He has presented solo exhibitions at the National Gallery of Australia, The Ian Potter Museum of Art and the Shepparton Art Museum.

In 2014, Nithiyendran was awarded the 2014 NSW Visual Arts Fellowship (Emerging) administered through Artspace and Arts NSW. In 2015, he was the winner of the 2015 Sidney Myer Fund Australian Ceramic Award, Australia’s richest and premier award for artists working in the medium of ceramics. He is regularly featured as one of the leading practitioners of his generation, being promoted to the public in a diverse range of print, online and television media related to art, culture and fashion. These have included ArtAsiaPacific (Hong Kong), The Art Newspaper (London), Asian Art Newspaper (London), ABC Arts Makers, Junkee, 10Men, SBS Sexuality, SMH, SBS Lifestyle, Artsy, Al-Jazeera, Australian Art Collector Magazine and Broadsheet.