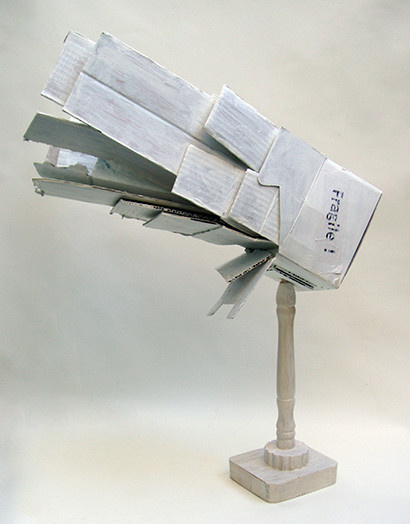 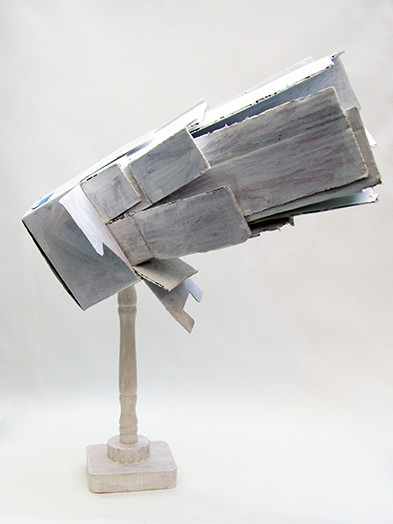 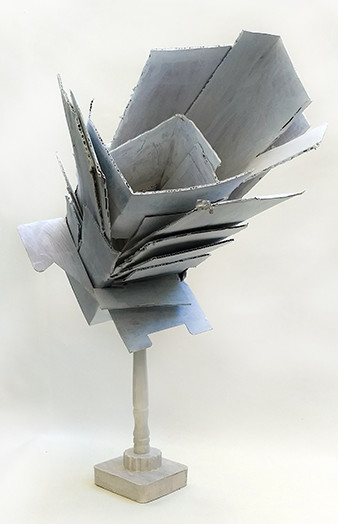 Hard angles and geometric form suggests a megaphone. Does it want you to speak up, or has it a need to speak up?

Sydney based artist, Shane Forrest has been working with ‘the street’ since the early 1980s. Forrest’s artistic practise and reoccurring themes focuses on the ephemeral, the discarded, the unremarkable and the evidence of entropy in our daily lives.

Forrest creates 2D and 3D works informed by his local environment, both the inhabitants, as well as the physical environment. Within his enduring attraction to representing entropy and ektropy his attention lies with the reification of amassed forces of the discarded packages of consumed promises. Forrest states his practise results in a simultaneous defence and attack by producing work with mainly reclaimed materials, with a recent concentration on old cardboard boxes as a medium. His practices are historically connected to the Nouveaux Realists of the early 1960s and Raymond Hains’ particular “affichist” conceptual concern for engaging with the unspectacular.

Forrest is a graduate of the College of Fine Art, UNSW receiving his Masters of Art in 1995, has exhibited extensively with solo exhibitions in Australia and Japan since 1981 and is represented in many private and institutional collections.

Shane Forrest, in conversation with Professor Ian Howard, discusses his work 'Speak up' and answers questions from the audience. Recorded on 20 October 2018 at the 2018 Woollahra Small Sculpture Prize exhibition, Woollahra Council.