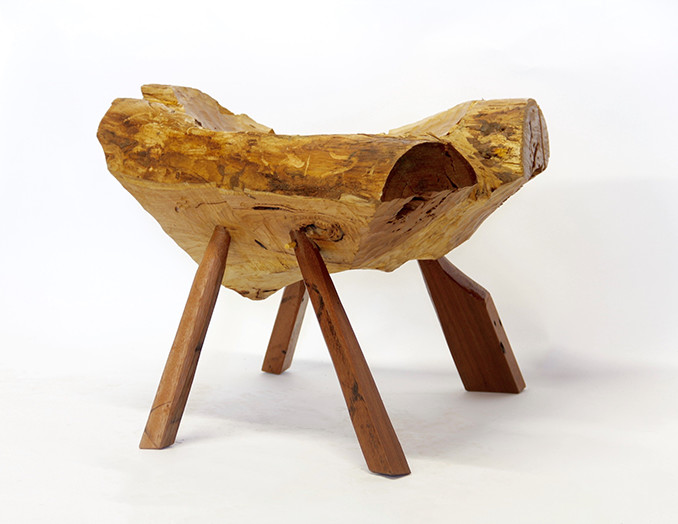 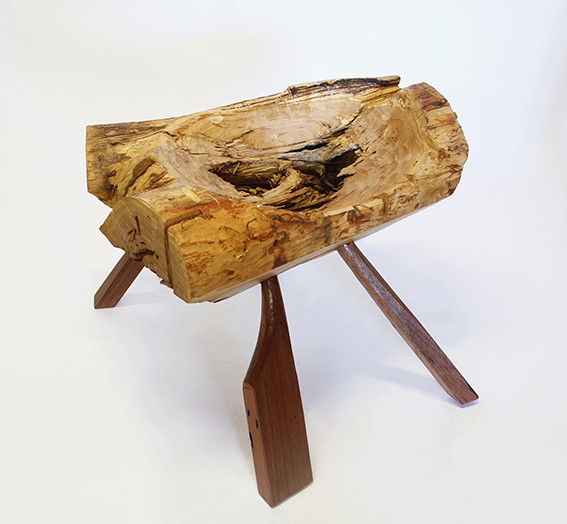 Truth Coming Out Of An Open Cut Mine To Shame Mankind

Truth Coming Out Of An Open Cut Mine To Shame Mankind is a horizontally presented branching section of a blackbutt tree, cut on the underside to reveal the layered strata of the wood grain and held aloft by four stumpy legs. A deep bowl has been cut into this section with a chainsaw and a curved carving chisel, revealing the cross section of the tree’s growth rings, reminiscent of the step-down hollows of open cut mines. This bowl reveals the dried out absence within the volume of the timber.

This is an Australian landscape in the tradition of Fred Williams and Warren Ellis – standing in a James Turrell tin shed looking at the tropical storm of the Anthropocene rolling in over the horizon of an open cut mine.

Robbie Karmel is a Sydney based artist, currently undertaking a MFA by research at the College of Fine Arts in Sydney. Previously, Karmel graduated from the ANU School of Art in 2008 from the Printmedia and Drawing department with first class honours. Karmel has had numerous solo exhibitions in Canberra and Melbourne and has been involved in many group exhibitions. He works with print, drawing, painting, video work and installation.

In 2009 Robbie underwent a residency at Megalo Print Studio under the Emerging Artist Support Scheme, as well as winning First Prize at the M16 Drawing Prize. In 2010 he was selected as a finalist in the National Portrait Gallery’s National Youth Self Portrait Prize and in 2013 received second place in the Tim Olsen Drawing Prize.

Robbie Karmel, in conversation with Professor Ian Howard, discusses his work 'Truth Coming Out Of An Open Cut Mine To Shame Mankind'. Recorded on 20 October 2018 at the 2018 Woollahra Small Sculpture Prize exhibition, Woollahra Council.